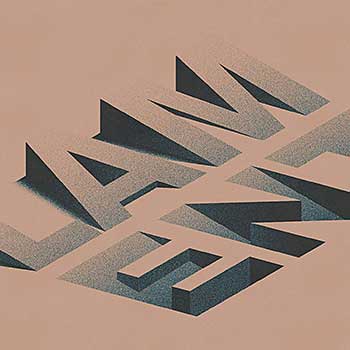 POST-HARDCORE GIANTS: Touché Amoré is back to bring some well needed hope and light during this pandemic with an absolutely massive album entitled Lament. The record, which frontman Jeremy Bolm spoke with Outburn about last month, is in Bolm’s words, a companion piece to the band’s 2016 release Stage Four—an emotionally raw album that saw the frontman working through feelings of grief and loss over the tragic passing of his mother. Now with four years behind him since that record, Lament deals with the aftermath of putting his anguish on display for the world to see, at times dealing with the singer’s newfound de facto role as, in his words, “the spokesperson for people who have lost their parents.” This is most evident on the track “I’ll Be Your Host,” where he discusses being approached by fans eager to discuss their lost loved one(s) with him, “Pin a pink ribbon on, to join the pain brigade. Our numbers are impressive, I’m afraid…Pin a black ribbon on, we’re the mourning campaign, I didn’t ask to lead this party, I explain.”

Longtime Touché Amoré listeners will be well accustomed to Bolm’s emotionally frank lyrics, which on this record, see him exploring everything from emotional fragility—as on the second track, “Feign”—to politics, as on “Reminders” and “A Forecast,” the latter of which compares the GOP to cancer. Meanwhile, “Savoring,” and “Limelight” deal with his experiences with love. The latter, early single “Limelight” is the longest track on the record and features Manchester Orchestra’s Andy Hull providing sung and yelled vocals. The result is a mesmerizing mash-up fans will never know they wanted, and it easily steals the show on the album, slowly swelling from soft guitar into a driving beat that leads to a ferocious chorus as Bolm exclaims, “I’m tired and I’m sore, I’m not so young anymore…” The song explores those unspoken, special silent moments between two people who have been together in a relationship for a while. After the second chorus, Hull appears with several lines of lyrics that see Bolm yelling, “So let’s embrace the twilight while burning out the limelight!” over the second half.

“Savoring” is a great track as well and packs as just of a punch lyrically, with the frontman belting out, “You make me resolvable, when upside-down or impossible!” There is just so much in this album to unpack lyrically, and while this is all Bolm at his most vulnerable, sharing his own feelings and emotions, there are so many instances that feel relatable and give the listener that “aha!” moment when they realize they’ve felt or feel the same way.

While the album feels at home in the pantheon of Touché Amoré records, it also shows a degree of experimentation and growth, whether it’s Hull’s feature on “Limelight” or guitarist Nick Steinhardt’s twangy pedal steel on the same aforementioned track and the song, “A Broadcast.” What’s more, the band’s decision to move forward with a new producer for the first time in several years, tapping the acclaimed nu metal producer Ross Robinson, brought a whole new level to the band’s playing and Bolm’s vocals—delving even further into underlying raw feelings behind the lyrics and capturing some of the most emotive sounding vocals of any Touché Amoré record.

Lament is easily the band’s best effort to date, though they seem hell-bent on topping each prior album with every new release, so how it will stand in the long run remains to be seen. You can glean more insights about this record from our interview with Bolm last month. ~ Nathan Katsiaficas