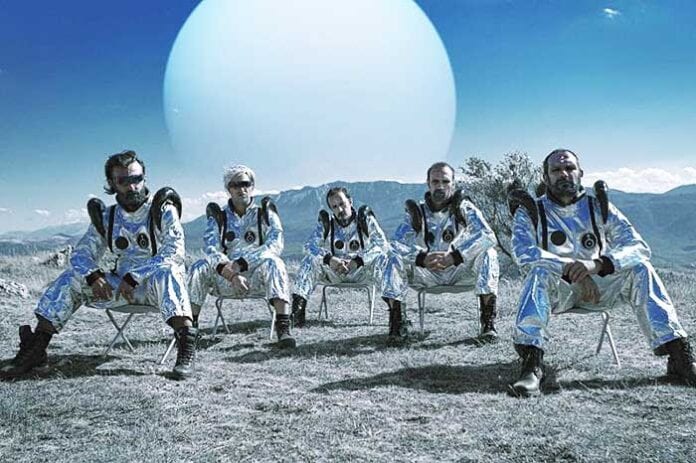 Kings of masterful heavy metal parodies NANOWAR OF STEEL bless the world with yet another spectacular music video for their new single “Uranus,” featuring none other than glam icon Michael Starr of the legendary STEEL PANTHER! Showing off their incredible choreography skills in shiny space suits, NANOWAR OF STEEL dance their way straight into your heart…and Uranus!

Michael Starr (STEEL PANTHER) says about the video for “Uranus”:
“This video will make your penis bigger with one view. The more times you view it, the bigger your penis will get. You’re welcome.
‘Uranus’ is a must watch video. It’s the only way to have your first eye orgasms. A fun video with a great story line. If you don’t like this song you must be deaf. If you don’t like this video you must be blind.”

Gatto Panceri 666 of NANOWAR OF STEEL adds about the video for “Uranus”:
“I know, this joke has been used and abused since 1781, from the very first day William Herschel discovered this planet. However, being a practicing astronomer and a professional idiot, I felt I had more right to use it as the subject of a song to be dignified with a Lady Gaga-level video (in all humbleness). Perhaps it won’t be the most original pun ever, but one thing we can tell you for sure: this joke turned out to be the most expensive one we’ve ever told so far!”

After gathering millions of clicks on YouTube and Spotify, Italy’s finest up-and-coming comedy metal outfit NANOWAR OF STEEL celebrates the overwhelmingly successful release of their previously sold out 2018 album, Stairway To Valhalla, with an exclusive first ever re-issue on vinyl via Napalm Records on December 4, 2020, now available for pre-order!