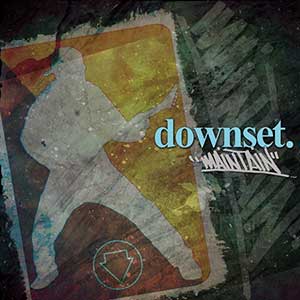 OG RAPCORE: Not all rap metal is nu metal, as many seem to think. The two can be mutually exclusive, as is the case of downset. Driven by powerful low end undercurrents, chunky guitar riffs, gruff, raw rhymes, and gritty bars, Maintain is a record that sounds equal parts refreshing and stuck in the past. “New Respect” is as catchy as it is bouncy, buoyed by big hooks and even bigger guitars. There’s a bit of Cypress Hill in “Won’t Forget,” another song with a memorable chorus. The house party vibe of “Wreck It” has to be an absolute beast in a live setting. downset. breaks out the heaviest riffs on “The Place to Be” and “Your Power,” and “Hear Me Now” might be the album’s most complete track, if not it’s grooviest, though closer “Deeper” might be an immediate contender for that crown. Either way, these final two tracks are one hell of a solid way to cap downset.’s return to form.

Maintain is a fun and concise listen at 34 minutes, which at times seems trapped in time, though there is little use denying that there’s some good stuff here. Your enjoyment of this record may simply come down to where you stand on rap metal. With Mantain, downset. is welcomed back to the scene with open arms. ~ Brian Campbell