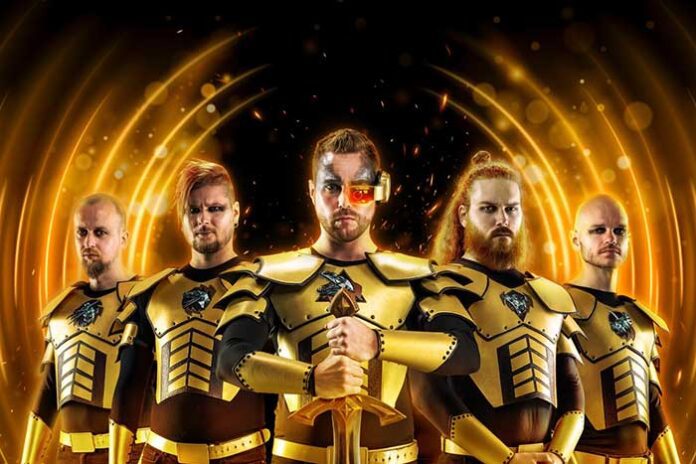 Prepare yourself for another battle of fantastical might with power metal space warriors VICTORIUS! Leading the listener into a far-out world of myths, tales and battles with new allies to save mankind, their new album, Dinosaur Warfare Pt. 2 – The Great Ninja War, merges the worlds of the band’s Dinosaur Warfare – Legend of the Power Saurus EP and previous album, Space Ninjas from Hell.

To celebrate the recent release of the new album out now on Napalm Records, the band tells us their biggest influences and the essential songs of Victorius to hear.

HammerFall: “The Way of the Warrior”

It all started with HammerFall. It was in the early 2000s when we discovered metal music as kids in school, and power metal was a big thing at that time. HammerFall had just released their Crimson Thunder album, and we fell in love with them immediately! That was the point when we had the idea to start our own band. So, as you know, “The Way of the Warrior” isn’t on Crimson Thunder, so why do we mention this one? Because it was the very first song we ever tried to cover. Of course, we did not have any knowledge about music or how to handle an instrument, but at least we tried! There were just a very few songs from other bands we did cover in the beginning, but the “The Way of the Warrior” was the starting point.

Of course, Rhapsody was and still is one of our all-time favorites. We always loved the big fantasy aspect in their music, as well as the super cheesy lyrics and melodies. Simply perfect! “Holy Thunderforce” is one of these songs we listened to a thousand times at parties, playing this song on repeat on and on and on! The funny thing is, that due to Fabio Liones’ lovely, strong Italian accent, you don’t understand a single word, haha! If you do not know the lyrics or read the lyrics while listening, you’ll probably understand anything but the original words. Great song!

Manowar: “Warriors of the World United”

Manowar! Love them or hate them…we love ´em! As mentioned before, we discovered metal music in the early 2000s, and it was impossible to ignore Manowar with the album Warriors of the World, which was released 2002. The simplicity is what makes this song so good, as well as Eric Adam’s vocal performance. It’s also one of these songs we always play in our dressing room before a show, just to get in the right mood and to gain our level of true metal power, haha!

Probably one of our most iconic songs. This song has all our typical trademarks—speed, silly lyrics, and a hook line every drunk person can sing along to after just one listen! The core of the song is quite simple, but sometimes simple is good. Also, a song about a flying cyborg samurai is always worth a listen!

One of our “older” songs and the first one on the dragon topic, which we continued on the following records. We play power metal, so dragons are necessary! Thomas Winkler, former Gloryhammer singer, did some guest vocals in this song. What makes this song so special for us is the fact that such an iconic and great singer as T. Winkler was joining us. And hearing him sing the melodies and lyrics that we wrote is just a great feeling.

There we go again, Dragons! And Dinosaurs! Fighting against each other, yeah! A new song from our brand new album, Dinosaur Warfare Pt.2. Typical Victorius song—fast, catchy, silly…everything you need! In a certain way this is a tribute to power metal in general. When we wrote this one, the goal was to create a song full of clichés, not just with the lyrics but also in the music with all the trumpets and uplifting melodies.