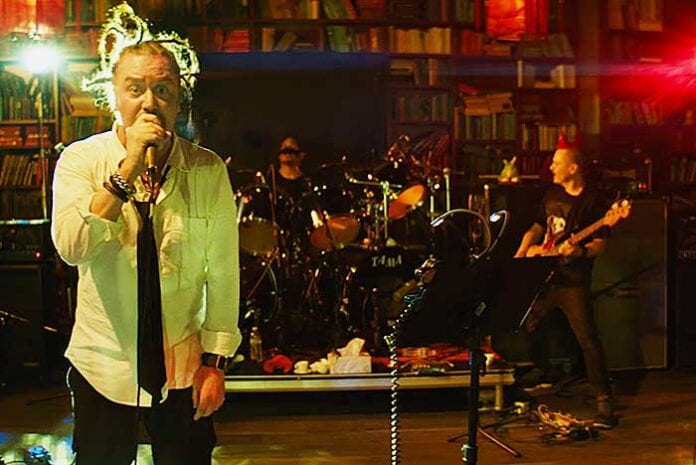 REVIEW AND SCREENSHOTS BY KELLEY SIMMS

Eureka, California-based metal band Mr. Bungle is back after a long hiatus with new members. At the core of the band in its early formation in 1985, they were a full-on thrash band, later introducing elements of funk metal, alt-metal, avant-garde metal, and experimental rock on its later albums, including 1995’s Disco Volante and 1999’s California.

The Night They Came Home: A Virtual Live Concert Experience was shot at the Eureka Public Library on Halloween, as the stage set-up was decorated with bookcases, hardwood floors, and various props. Performing mostly from the band’s re-recorded 1985 demo The Raging Wrath of the Easter Bunny Demo, released on the same day as this show, the band was right on the money. From the merciless fills and slamming beats of Dave Lombardo, to the relentless riffing of Scott Ian, to the poignant bass lines of Trevor Dunn, to the frenetic guitar solos of Trey Spruance and the unique vocal delivery of Mike Patton, the band ripped through a 12-song set, including a raucous encore of Van Halen’s “Loss of Control.”

Since the band’s formation, humor has always played a big part in Mr. Bungle. From the opening set of stand-up comedian Neil Hamburger, to the Mr. Rogers’ opening number “Won’t You Be My Neighbor,” to the playful in-between song banter, to taking a tea break, to the interspersed comedic segments of guests such as Henry Rollins and comedian/actor/metalhead Brian Posehn, there were several funny moments that accompanied the precision-like performance.

BEST PARTS:
There were many moments of thrashing precision of riffs that stopped on a dime and breakdowns so ferocious that you’d almost be afraid to get in the pit if it was a truly live concert (see “Raping Your Mind,” “Methematics”). The entertaining pre-show interview with the band was highly informative. The Slayer “Hell Awaits” cover was eagerly anticipated until the band stopped right before the verse begins and transitioned into dirty-laced lyrics of “Summer Breeze” by Seals & Crofts. However, I really wanted to hear Patton sing Tom Araya’s lines so bad. The instrumental precision and vocal harmonies on “Eracist” and the pure savagery of closer “Sudden Death” were also highlights. The Van Halen cover was a nice touch, while the Circle Jerks’ minute-plus “World Up My Ass” was a short shot of full-on aggression.

With the lack of any stage production values, shaky camera angles with an obvious lens glare reflection and minimal lighting—making the stage dimly lit—it actually gave the performance its raw charm. Plus, the sound was spot-on, while the band’s performance was top-notch.