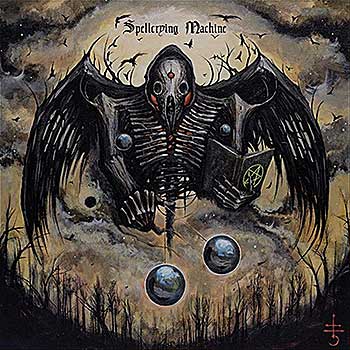 INSTRUMENTAL MELODIC TECH DEATH: This Belorussian duo may excise a focal talking point from their landscape by not employing a vocalist, but there’s still enough going on to make them worthy of a conversation or two—something beyond, “No vocals. Good musicians.” Instrumental metal can either be a showcase for shredders, or music of the sort where listeners imagine vocals being slotted into the mix with relative ease (or unease, depending on the case). Think of the difference between early Steve Vai, Joe Satriani, Ron Jarzombek’s non-Watchtower projects, the 80s Shrapnel Records scene, et al. versus bands like Pelican, Dysrhythmia, Karma to Burn, Russian Circles, et al. Of course, because nothing is sacred, Vai, Satriani, and many of the guitar god crew long ago added the occasional vocal, as has Pelican. And then there’s Watchtower, which could go either way, but mad props to Alan Tecchio (and Jason McMaster before him) for smoothing out the chaos.

Anyhow, Essence of Datum leans more towards the latter of these two directions. Overall, the band flirts with the Gothenburg sound recalling Dark Tranquillity and early In Flames. That would be the starting point because there are moments where they branch out towards black metal on the title track and Bay Area thrash during “Binar.” Heck, there are even sequences in which the melodic layers and harmony guitars remind of Chris Poland’s Return to Metalopolis and classic Metallica album enders, especially when ax slinger Dmitry Romanovsky uses moody tri-tones that build toward the epic sounding, arpeggiated denouement of final track “Cavum Atrum.”

Given that the majority of the songs on Spellcrying Machine are written and structured more conventionally, it’s easy to sit back and enjoy its languid melodies and classy riff style. Hailing from this spectrum of instrumental music allows listeners to also sit back and envision what kind of vocalist the band needs and how and where (s)he would fit in. Or, they can treat it like a karaoke opportunity. This has us wondering how often the band gets sent audio files with ambitious interpretations of their music by budding front(wo)men and how often they regret stepping on the hornet’s nest of being an instrumental band that aren’t lightning fast shredders. ~ Kevin Stewart-Panko