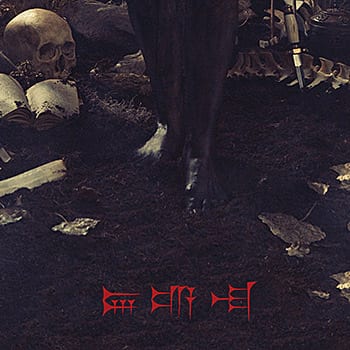 HAUNTING FEMME FATALE DARK ROCK: A Sumerian reference to the ancient Mesopotamian underworld for which there’s no return and the dead are neither punished nor rewarded for their deeds in life, Irkalla, the first release in nearly a decade from New York’s Vajra, is a slow burning affair that ebbs and flows through various layers of moody soundscapes, an aural journey that serves as the first part of a conceptual trilogy exploring the various levels of the philosophical (Eastern and Western) and esoteric consciousness. Trust me, you’ll understand that more once you listen.

The opening title track is a foreboding amalgamation of sound, which bleeds directly into “Maya.” Led by dynamo frontwoman Annamaria Pinna, the album’s temperamental first single wades between operatic refrains, powerhouse hooks, and stunning, downtuned riffage, showcasing Vajra’s innate musicianship. “Crown or Crucify” is a standout affair, a powerful track that’s as much prog as it is dark rock. “Wavering” is a return to tense instrumentations, this one fit for a suspenseful movie scene. “Sever the Tie” incorporates worldly sounds before launching into yet another explosive chorus, something Vajra seems to be quite adept at. This is yet another powerful performance by Pinna, who shines bright as the star of Irkalla.

With Irkalla, the instrumental tracks, while purposeful in the grand scheme of what is a concept album, are ultimately distracting. The three actual tracks are quite good in their own right, but when all combined together, Irkalla is knocked off its moorings. They don’t allow the album to get into a sustained rhythm, especially a track like “Wavering” coming off of “Maya” and “Crown or Crucify,” where the album is just beginning to pick up a head of steam. ~ Brian Campbell