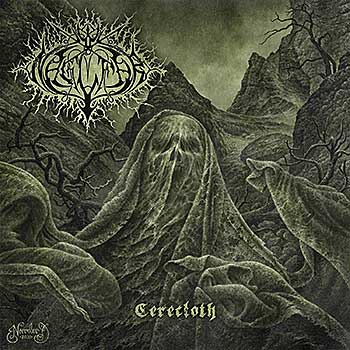 SWEDISH BLACK METAL: After eight years of silence, Swedish black metal veterans Naglfar have once again emerged from the darkness on the black wings of their seventh studio album, Cerecloth. Fondly remembered across the globe for their previous endeavors into blasphemy such as Harvest and Téras, Naglfar has quite the reputation to uphold and Cerecloth does not disappoint. Naglfar’s classic chaos reappears in full throttle on their latest release, accompanied by subtle progression and evolution of their blackened ambiance that will satisfy the expectations of new and old fans alike.

The first two singles from Cerecloth, “Vortex of Negativity” and the title track “Cerecloth,” are a welcome reminder of the brutality and soul punishing chaos we have come to expect from Naglfar. Relentless blastbeats, soaring melodies, and unspeakable horror all await within—a much needed confirmation that Naglfar is very much still a force to be reckoned with. The third single, “Cry of the Serafim,” pushes the envelope a bit more, trading in pounding drums and relentless cacophony for brooding melodies and depressive chords, while still remaining true to their unyielding blackened death influences.

The rest of the album brings more of the same. Certain numbers allude to old favorites, such as “Like Poison for the Soul”—the third track with a bass intro reminiscent of the classic Harvest title track, with a simplified “bang your head until it falls off” melody to match. “Necronaut” is a brief glimpse into uncharted waters, trading their classic death metal influences for a fresh take driven by dissonance and doom, while the rest of the album delivers more classic Naglfar chaos.

All in all, Cerecloth is a solid studio album. More of a natural continuation of the band’s past work, Cerecloth feels more like an extension of their previous releases than a new beast entirely, but still brings everything to the table and more that we’ve come to expect from the Swedish trio. A nod to the classic Naglfar sound we have grown to know and love while still making steady if subtle forward progress, Cerecloth is proof that black metal is still alive and thriving within the depths of Sweden, and Naglfar has no intention of relenting anytime soon. ~ Jon Krieger