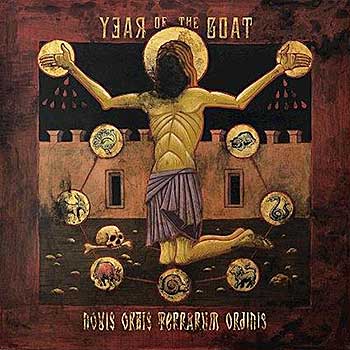 OCCULT DOOM ROCK: With all the talk in the band’s bio about Satan, sinning, subordination, and shadiness all draped in a blackened veil of arcane, occult imagery, and the usage of Latin for that added sinister edge, one might expect this Swedish sextet to burst out of the gate with blackened and thrashing war metal played at a million incomprehensible miles an hour. And then there’s that moniker…if you’re referencing goats in some capacity, chances are you’re not the type to be pussy footing around the gates of hell. However, as Slayer long ago taught us, evil has no boundaries. The dark side works as effectively, arguably if not more so, when its offerings emerge more insidiously from the wings and not necessarily in a blatant clamor for attention. Think of the “sinister” sounds that have come from Coven, In Solitude, Mercyful Fate, Tribulation, Luciferian Light Orchestra, and Ghost versus loud and demonic black and death metal bands openly professing their allegiance to ol’ Nick and his handiwork.

This Norrköping band takes most of its musical inspiration from the 60s and 70s and is thematically devoted to the shadow side of life and death. The sound is a weaving of nefarious minor key melodies into driving, acidic hard rock underpinned by an eerie layer of haunting organ and keyboards that are as dark and stormy as they are bright and sunny. “Luxuria” features as much pastoral drone and angelic vocal workouts as stadium-ready guitar wailing and communal fist-pumping. Tracks like “Subicio” and “Superbia” emerge from the vault of hard rock history, the former drawing influence from “Stairway to Heaven” and “Don’t Fear the Reaper” during its epic 14 minute running time, while the latter is like a cross between early Kiss and Grand Funk Railroad powered by early Mötley Crüe guitar tones and a bass rumble reminiscent of a Cathedral conducted magic carpet ride. “Invidia” draws parallels to both newer Baroness and ELO with triumphantly proggy harmonized guitar duels giving the fret watchers something to watch and the hippies something to shake their hip huggers to, “Acedia” makes use of a propulsive beat that’s almost Western swing/“Run to the Hills” in its pristine gallop, and “Ira” is a generally dull ballad that is saved by the country-ish twang and the upbeat moves made around its six minute mark.

There’s evil around every corner, kids. But you shouldn’t be shy about welcoming it into your lives when it comes in this top-notch form. Actually, in this case, you may not have a choice. ~ Kevin Stewart-Panko