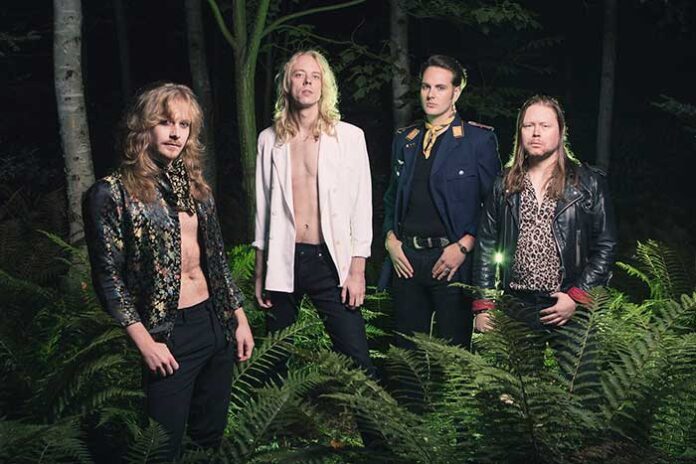 Rising Swedish hard rockers BOMBER has released its debut album, Nocturnal Creatures, on Napalm Records. Don your bandanas, leather jackets, and distressed jeans, because heavy metal is shining brighter than ever as Swedish newcomers BOMBER brings back the hottest era in hard rock history. Asserting their own trademark blend of 70s and 80s inspired classic and hard rock with catchy hooks, top-notch guitar solos, and a vibrant aesthetic, BOMBER is sure to leave their mark on modern hard rock with Nocturnal Creatures.

When we started working on what would become our new album, Nocturnal Creatures, we were all really inspired by Def Leppard. We love how they blend their young, snotty, street-smart rock with big and thought through production. And this album probably has the best guitar sound in the world!

Fleetwood Mac is just absolutely amazing. They are masters of writing hits while at the same time making the songs sound interesting. They were really important to us both in the writing process but even more in the studio, producing and mixing Nocturnal Creatures.

You could pick any Iron Maiden song and we would be happy with your choice. I just couldn’t leave this band out due to the impact they have had on all of our lives and musicianship. I think I can speak for the whole band when I say that they are the most influential band for Bomber. I don’t think that we ever consciously try to sound like Iron Maiden, but they formed our playing in such a way that they will always be part of Bombers sound.

If someone asked me what Bomber sounds like, I would probably start with this song. It has it all. A drum intro to kick start it all. Guitars spitting out the main riff, which will make it impossible to drive your car on the legal side of the speed limit. A great and instantly recognizable chorus, blazing solos, dual leads. It’s everything you would want in a great rock song.

“A Walk of Titans (Hearts Will Break)”

While “Zarathustra” is a straight to the point rocker, “A Walk of Titans (Hearts Will Break)” is more of a growing epic that will knock you off your feet. This is by far the darkest song on the album. It’s about the end of relations and burning bridges. Driven by huge drums and a superb vocal performance by our own Anton Sköld, this is one of the songs that I am most proud of on the album.

This one is more of a midtempo Def Leppard-ish track where, again, Anton delivers great vocal lines. I think it’s a really smart and well produced song where you have both the classic big drums and guitar riffs but also the anthemic pop inspired chorus backed up by strong backing vocals. I really look forward to playing this one live!