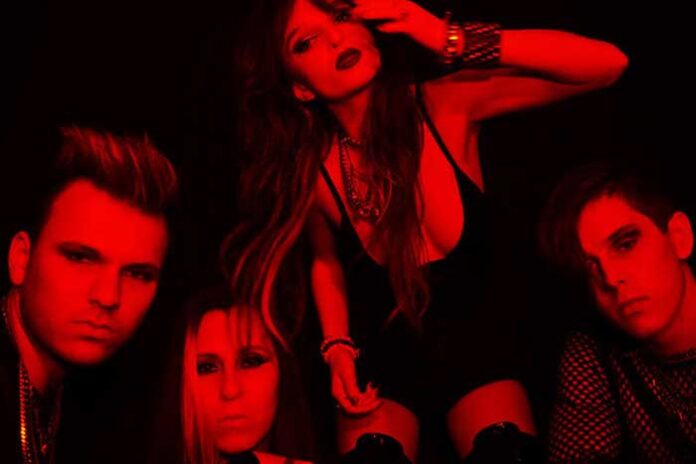 Like a molten mist extrapolating cracks in the resistance, the opening chords of The Haunt’s new anthem swoop in like a Phoenix as a propulsive rhythm rises from beneath. Pulsing forth as if it’s mowing down all that is woebegone, “Make Me King,” with rhapsodic vocals by Anastasia Haunt, is an invitation to ascend, to join a secret procession, a wayward taste of the outer limits of inner space.

“Make Me King” is a sadistic little tale about an unintentionally abusive relationship. And how human nature can be a tiny bit insidious. We’ve all been there, it’s never pretty but it’s always interesting,” shares guitarist/vocalist, Maxamillion Haunt, who co-produced the track with Nick Lewert (the band’s drummer), and Grammy nominated engineer Brandon Friesen (The Kooks, Sum 41, Three Days Grace).

Accompanying the single is an American Horror Story-inspired music video laced with enigmatic imagery captured in Los Angeles intercut with helter-skelter footage soaked in a red-tint filter that’s reminiscent of “The Woods,” the sequel to the 1999 cult classic “The Blair Witch Project.” Shot and edited by Lewert, it’s a powerful jigsaw where the pieces not only fit, they’re tantric.

Dropping September 9th, opening night of the band’s 30-date North American Tour as direct support for Mongolian folk rock and heavy metal band The HU. Kicking off in Indianapolis, ‘The Hun Tour’ devours all four corners of the U.S. (plus Canadian dates in Calgary, Edmonton and Vancouver) before wrapping in Los Angeles on All Hallows’ Eve. In addition to the costumed tour finale, a highlight of the run is sure to be an Austin City Limits After Show at Emo’s on October 7th that sees hard rockers Rival Sons join the bill.