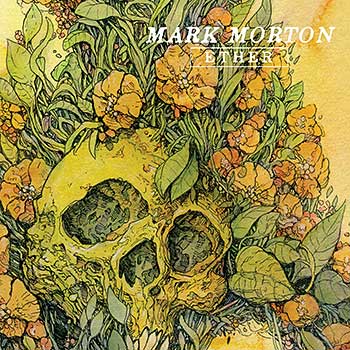 ACOUSTIC ROCK: Lamb of God guitarist Mark Morton shows off his skills as a diverse musician with his second solo offering, Ether, a primarily acoustic affair. Known for his extreme thrash music with Lamb of God, Morton first ventured into solo territory with last year’s Anesthetic, which featured songs tailor-made for many guest vocalists, such as Chester Bennington, Randy Blythe, Chuck Billy, and more. On his newest adventure, the five track EP Ether, Morton strips everything down and does a couple of outside the box cover songs with The Black Crowe’s “She Talks to Angels” (featuring Halestorm’s Lzzy Hale) and Pearl Jam’s “Black” (featuring Mark Morales). It’s easy to tell that Morton is influenced by the blues-laden/classic rock side of things, with a nod toward 90s grunge/alternative rock components.

The heartfelt opener “All I Had to Lose” is a personal song about overcoming one’s demons, decorated with Morales’ emotive, soulful vocals and orchestral elements with a melodic, clean guitar picking style. “Love My Enemy,” featuring Light the Torch and ex-Killswitch Engage singer Howard Jones, is an emotional and engaging composition, especially with its soaring vocal harmonies on the chorus. The aforementioned Lzzy Hale absolutely owns the “She Talks to Angels” cover tune. By adding a soulful female voice, Morton enhances the song’s dynamic in a totally different viewpoint in which one couldn’t have possibly ever imagined. “Black” equally impresses while sticking close to the original.

Morton has already proven himself with his previous solo release, and Ether continues his diverse creativity. Although it’s only five tracks with two being covers, the album is an honorable effort that will most certainly supercharge him for the next highly anticipated, soon to be released Lamb of God record. ~ Kelley Simms