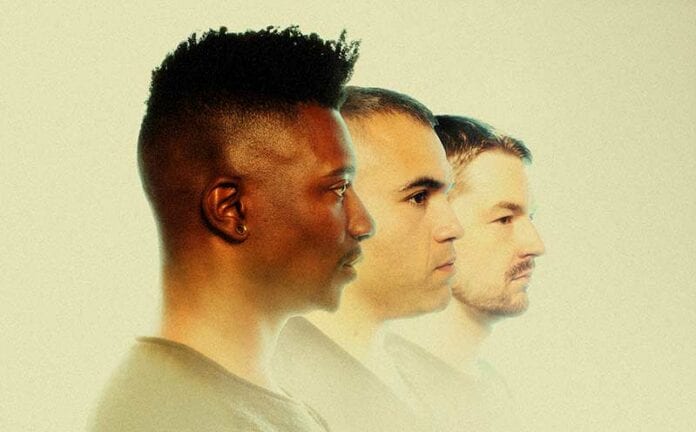 It’s hard to think that Animals as Leaders forged its legacy only 10 years ago. The trio of musical geniuses still reigns today, but we can’t forget about the band’s powerful self-titled debut that will perpetually leave its mark on both metal and instrumental music history. Any Animals as Leaders fan can recognize the heaviness and progressive tracks, such as “Thoroughly at Home,” but the band has evolved since its debut. Today, we can truly hear the versatility Animals as Leaders is capable of. Their drummer of the last several years, the modern great Matt Garstka, certainly takes this band in a mind-blowing direction, which is evident on 2014’s The Joy of Motion.

While it’s easy to marvel at their past discography, Animals as Leaders has a bright future ahead of them and are currently on a 10 year anniversary tour. Until our ears can behold new material, we can appreciate a decade of incredible musicianship. We spoke to Garstka about the legacy of Animals as Leaders, his contributions to the band, his signature stick model with Vic Firth, and what he can say about the new forthcoming album.

Let’s start with Animals as Leaders’ history—the formation of the band to the success that you have today.
The band originally started because Tosin Abasi [guitar] was in this band called Reflux. I forget if they had only fulfilled one of two or two of three albums, but there was still another album that they were supposed to fulfill to the label, for their contract. So, Tosin ended up only doing that as a side-project because the band broke up. Actually, the singer [of that band] was Ash Avildsen, who’s now the owner of Sumerian Records. Tosin and Misha Mansoor [Periphery] started a side-project. The majority of it was Tosin’s ideas, his technical ideas and compositions. Misha helped arrange the songs, wrote some parts, and programmed the drums for it. So, the first album doesn’t even have real drums. There’s not a drummer playing, it’s programmed. I think Javier [Reyes, guitar] helped write some parts on that first album, as well. There are some songs he contributed. But that was the formation of the band. The album actually got leaked and went viral from there. Navene [Koperweis] joined. They toured a bit. They toured with Deftones and Circa Survive. From that point, Navene left. I just moved to LA and I was making cold calls, trying to find a gig. And I heard the drum chair was open. I had a friend who knew Tosin, and he recommended me. It was a dream gig. The exact type of stuff I wanted to play. It was fast, aggressive, technical, and explorative. I joined at the beginning of 2012. The rest is history. We made The Joy of Motion together and The Madness of Many [2016]. We released a live album last year. We’re in the writing process now. That’s delayed a bit because we’re on tour in celebration of 10 years as a band. We thought it was a landmark that deserved some type of acknowledgement.

You touched on it a little bit, your personal history with the band. You said this was a dream gig. Before you joined Animals as Leaders and became a professional drummer, was a band like this a band you pictured yourself being in?
Yeah. I was a fan of the band before I joined. It’s exactly the type of stuff I wanted to play. It was a good fit. Not a lot of other drummers can play this sort of thing. They’re much rare. I was able to steal the gig.

With your current set list, you still play a combination of material from before you joined the band and also material that you’ve contributed to. How do you approach playing both types of songs live?
Well, I feel a little bit more free in making changes live and expounding on parts, knowing they were programmed drums. And they’re not programmed by a drummer, per se. Misha has played drums before, but that’s not his primary instrument and not his thing. I expound among parts, and I think there’s an art in that, for sure. You don’t want to expound and embellish the parts too much to where they’re not recognizable and it doesn’t give the listener the same feeling that the original album version did. Yeah, I changed things up. I would say 80 percent of it is the same, and the vibes are still there. But I don’t know what parts are harder, honestly. The parts that someone else programmed or the parts that I come up with, because I’m not afraid to challenge myself. Not sure what’s harder, they’re just a bit different.

“WE’RE DEFINITELY ALL IN THAT SAME HEADSPACE WHERE WE’RE TRYING TO PUSH OURSELVES TO CREATE SOMETHING NEW AND SOMETHING ADVENTUROUS.”

Looking at the live footage of you playing songs from the first album, you put your own spin on things. Do you think it’s important for any musician, but specifically a drummer, to challenge themselves in that same situation you were in?
Of course. I think that’s the genre we’re in. It’s not the type of genre where you’re going for formulas, the most amount of fans, and the most amount of plays on Spotify. We’re definitely all in that same headspace where we’re trying to push ourselves to create something new and something adventurous. The parts are very composed and they’re quite dense. So, it’s pretty hard to change things without them sounding different. I always looked at live shows and noticed bands expound on the live version, and you get a little something extra. You don’t feel like you’re watching people mime the album. Although there’s something to be said to deliver a crisp, clean, and accurate representation of the clarity of an album. I think the audience should receive something extra and something different than the album version.

As a drummer, is it difficult to have a strong stage presence, with all of the cymbals and drums surrounding you?
Well, I don’t twirl sticks. That’s never been my thing. To me, that’s selling out (laughs). Although I’m the youngest guy in the band, I’m pretty traditionalist. I grew up listening to fusion guys and jazz guys, and those guys aren’t about the show. They’re about the audio experience. Although, the seriousness of that music is usually pretty palpable live. Just because you’re not flailing your arms and twirling your sticks, it doesn’t mean you can’t be intense and captivating. And I think our audience is very open to that, as they’re typically musicians. For me, I think it’s easier to make more of a show because I’m playing a very physical instrument. Guitar is more immobile in ways and it’s more detailed oriented, which is hard for crowds to see. If you’re watching a drummer, you can see exactly what they’re doing from a hundred feet away. I get into the music and beat the shit out of the drums (laughs), and people like to see that. But I do it in an artful way, like a painter (laughs).

A fan commented on one of your YouTube videos, “You took Animals as Leaders to a different level.” Do you agree with that?
Yes, but I don’t want to come off as arrogant. I definitely helped elevate the intensity and technicality of the live shows.

Your fan page lists a whole paragraph of your influences. What is the purpose for any musician, but for a drummer specifically, to have many influences?
I don’t know. That’s a good question. There are definitely people who are able to stick with one genre and really dial that in, and that’s their thing. I think this is a unique case, in a sense that the music is crossing many genres. It has a lot of influences. As I said, it’s explorative. There’s metal, there are jazz elements, there are classical elements, there are electronic elements, there are fusion elements, as well. I can really only speak for me personally and how it’s shaped my journey. It’s just giving me so many different palettes to choose from, playing jazz, rock, Latin, funk, R&B, gospel, metal, punk, even some country and pop in there. It’s one of those things where more is more, less is not more.

You have another band, Victoria. Does your work with Animals as Leaders have any influence on that or vice versa?
No, it is similar in that it’s technical and it’s quite rhythmic, but it’s pretty different, the places we’re exploring musically. That’s the identity I’ve been able to carve out for myself, that kind of polyrhythmic world, the technical world, and instrumental world. There’s no singer in that band. I don’t know if it’s that I don’t like singers or they don’t like me (laughs), but I’m fine with it. I’m at peace with it.

You have a signature stick model with Vic Firth. What’s it like having your own drumstick, and how did the final product come about?
It’s pretty awesome, firstly, to have something designed specifically for you and that you helped design for your needs. Then again, it’s elevated even more so that people can buy it and feel what I feel on the drums, to an extent. A couple of years ago, we started designing this, and it’s crafted for power playing. But also, in Animals as Leaders, I require quite a bit of nimbleness, finesse, and agileness in my sticks. Those are the characteristics I need, and I think we came up with a pretty good design that sits in that place where you can bash with it, but you can still get out articulations and embellishments.

What do you love about playing in an instrumental band?
I like that you’re not told what the story us. I like that it’s abstract in that you have to come up with your own story or your own imagery for the song. Because of that, it’s more accessible to a full range of people. Although, the majority of our fans are men. I think that’s partially because women like singers, they’re drawn to singers. I like that you can listen to a song a hundred different times and you can go through a different range of emotions and imagery.

Now let’s talk about the future. How do you see Animals as Leaders evolving?
That’s a good question. I don’t want to give anything away or color people’s perception of our new material. We’re definitely still in the headspace of exploring new territory and trying to lead the genre to the light. We’re looking at collaborating with quite a few musicians on this next release. So, people will get to hear Animals as Leaders yet again in a new light.

TICKETS FOR THE ANIMALS AS LEADERS TEN YEAR ANNIVERSARY TOUR ARE ON SALE HERE: https://www.animalsasleaders.org/

MUSHROOMHEAD: What A Wonderful Life