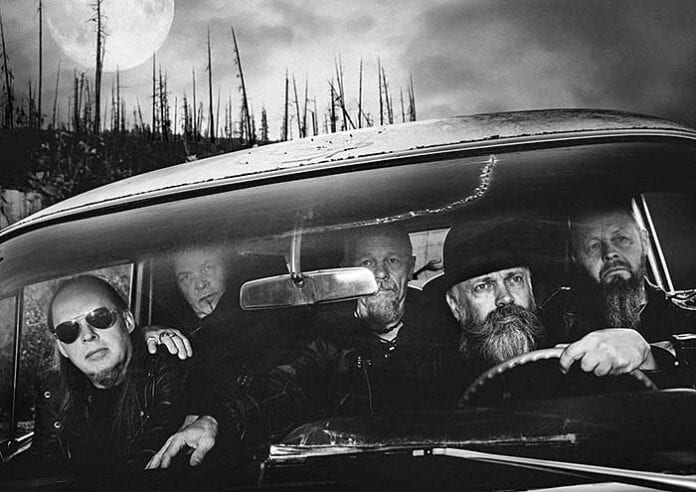 Why Längquist was just a one-off session vocalist for Candlemass is anyone’s guess, but after his departure, the band featured separate periods with melancholic crooner Messiah Marcolin, followed by doomtastic ex-Solitude Aeturnus singer Robert Lowe, to the brief stints with Mats Leven and Thomas Vikstrom at the mic.

Candlemass—featuring Längquist, bassist Leif Edling, guitarists Mats “Mappe” Björkman and Lars “Lasse” Johansson, and drummer Jan Lindh—is releasing its second EP in the past year. The Pendulum is six unused tracks from its 2019 The Door to Doom sessions.

After 35-plus years, Candlemass remains firmly on top of the doom metal heap. Edling spoke with us about Candlemass’ Grammy nomination, their new EP, and the band’s long-lasting legacy.

Were you actually honored to be nominated for Best Metal Performance with “Astorolus – the Great Octopus,” or does it mean that much to you, being a Scandinavian band compared to how some people revere it in the States?
For Europeans, I think the US Grammy Awards is a big thing. It’s the biggest award ceremony in the world with mega-selling international top acts being nominated, performing, and winning. So, for us, it was a huge honor to be mentioned there among all the legends. The news about the Candlemass nomination was also all over the media here in Sweden. Good promo for us.

“I HAD A BLAST JUST BEING THERE, BEING NOMINATED, HAVING THE PERFECT END TO A GREAT YEAR.”

Tool was the most obvious popular band to win Best Metal Performance. If anyone would have deserved it the most as being metal, it would have been Candlemass or Death Angel. What’s your thought on the whole award process?
We were happy just to be there. Us old farts walking the red carpet, mingling with the crème de la crème of US artists and music industry. It was fun and also a bit bizarre that we even got nominated in the first place! We certainly didn’t expect to win, so we went to LA just to have a good time and enjoy the weekend as much as we could. With such big events it is very common that the most popular artists win. It’s a popularity prize more than anything. But I couldn’t care less. Congrats to Tool! I had a blast just being there, being nominated, having the perfect end to a great year. The US Grammy nomination also helped us win the Swedish Grammy a week later. I’m very sure of this.

Getting original singer Johan back in 2018 must have felt like a godsend or prodigal child returning home? What took so long, and how did it finally all come about?
We’ve been thinking about it for many years, but it never happened, for lots of reasons. But I think it was meant to happen this time. Everything just clicked. Here he was, the singer we’ve been looking for all our careers (laughs). All we had to do was to ask. Johan being back in the band after 32-something years was a match made in heaven!

With the six unused tracks from the The Door to Doom recording sessions, did you have an inkling you might use them later for The Pendulum?
Yes, I had it in the back of my head we should use them somewhere along the line. The three full songs were too good not to use. I think our fans can appreciate them even in demo form. And, maybe it’s also fun and interesting to hear the demos, what they sound like.

“JOHAN BEING BACK IN THE BAND AFTER 32-SOMETHING YEARS WAS A MATCH MADE IN HEAVEN!”

Although the band is always moving forward yet never abandoning traditionalism, did you consciously try to give the fans what they wanted with these new records?
What do the fans want? I have no clue. I just write my songs and try to make them as good as possible. This time we seem to have done everything right. Johan back in the band, the tour with Ghost, the album getting great reviews, a whole bunch of amazing shows. Sometimes everything clicks. Other times you do the same thing and nobody cares.

“The Pendulum” was the last thing you wrote for The Door to Doom, but you didn’t have time to finish it. How much was left to compose and how did the rest of the process go?
I changed the main riff a little bit. The vocal melody, too, naturally since the riff wasn’t the same. But the chorus was the same, the bridge. I added the solo part. Good song. I like it a lot. The band did, too. I’m happy the label wanted to release it plus help me finance a couple of studio days.

Forming the band back in the 80s, did you have any inclination of what would become of doom metal?
When we formed Candlemass in 1985, the term doom metal wasn’t invented yet. So, I’m proud of the fact that we came up with that tag when we named our first album Epicus Doomicus Metallicus! We were pretty much alone in that arena in 1986, but now it is a well established genre. Not big, but still. If doom metal was everybody’s cup of tea, it would lose the magic.

Do you feel that most of these newer bands have Candlemass and, of course, Black Sabbath to thank?
I have no idea where they find their influences. Some of them have Paradise Lost as idols, some Electric Wizard, some Pentagram. Some even Type O Negative. But yes, when we play the festivals, there are bands and people coming up and want to say thank you and/or take a photo. And we always sign a lot of records.

It’s been 34 years since debut of the Epicus Doomicus Metallicus album. What do you remember the most or are most fond of when thinking about the writing and recording process for this game-changing album?
That we took out all the fast songs we had and went for a heavy record instead. We could have made it easy on ourselves, keeping the uptempo stuff, but I remember we had discussions about it and I wrote “Solitude” as the last track for Epicus. And it became the opener and eventually our signature song.

“IT WOULD BE NICE TO MAKE ANOTHER ALBUM NEXT YEAR PLUS ONE MORE SPIN AROUND THE GLOBE.”

Fans may have a particular era of the band that’s their favorite, especially based on which singer was at the helm at the time. What has been the most rewarding thing about the band throughout its career?
That we remained true to our style. We never flaked out or sold out. I’m very proud of that! But we are all old metalheads with pretty cool record collections without too many cheesy records in them. Having said that, Mappe collects Kraftwerk and I really like The Doors and Crosby, Stills, Nash (and Young).

Before The Door to Doom happened, were you previously promising an end to recorded output or teasing retirement?
We’ve said it a couple of times actually, after Chapter VI and after Psalms for the Dead. But the doom kept on calling, so we came back with The Door to Doom and had probably the best year of our career.

If the day ever comes that you do decide to retire, what would you like fans to remember most about Candlemass’ legacy?
If people say, “They were a good band,” I’ll be extremely proud and happy about that legacy! Well, thinking about it, “Solitude” should, for obvious reasons, be put in the doomsday vault in the Arctic (laughs). I think we have accomplished all the goals we had for this band. But it would be nice to make another album next year plus one more spin around the globe. We like to travel, we love to play.

Angel Vivaldi and Nita Strauss Interview Each Other