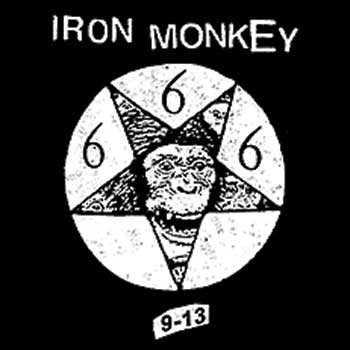 SLUDGE: The bar for an Iron Monkey reunion album is very high. There’s the impeccable sonic assault and cultic lore of their back catalog, the absence of singer/throat mangler Johnny Morrow, who died in 2002, and given 2014’s twisted triumph of Eyehategod, nothing less than perfection is acceptable. Somehow, despite all of that, 9-13 is everything that it should be and more. Full of vitriol, “Crown of Electrodes,” sets the stage with that familiar Black Sabbath via Black Flag, slow punk, cough syrup blues that is the epitome of sludge—requisite nod to the Melvins goes here. Guitarist Jim Rushby is on vocals, and his snarl, while not as unhinged as Morrow’s, is appropriately gnarly. Guitarist Steve Watson is on bass now, and completing the trio is drummer S. Briggs. An early highlight is the dizzy “Toadcrucifier/R.I.P.PER,” but it’s not until later that Iron Monkey rises to the heights of the band’s former glory. The tipping point is “The Rope.” Its nearly five minutes of plodding, relentless heaviness is the pinnacle of the genre, the kind of accomplishment that other bands attempt to ape. Also of special note is the closer, “Moreland St. Hammervortex,” a stubborn, always at the edge, mess of a song. It’s sloppy and noisy. And it’s good. Iron Monkey does everything right on 9-13. Long live Iron Monkey. ~ Nick DeMarino