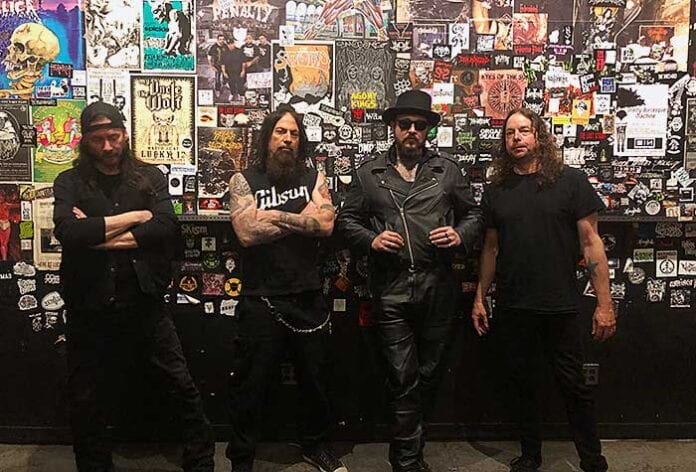 You might not be very familiar with New Jersey doom metal newcomers Vessel of Light, but guitarist Dan Lorenzo (ex-Non-Fiction, Hades), vocalist Nathan Opposition (Ancient Wisdom), bassist Jimmy Schulman (Hades, ex-Attacker), and drummer Ron Lipnicki (ex-Overkill, ex-Hades) have been around the musical block a few times over the years in several other well-respected bands.

Formed in 2017, Vessel of Light has been quite prolific, releasing several records in its short time of existence. On its third full-length album, Last Ride, the fearless foursome has created 10 spine-tingling, Sabbathian-esque doom metal gems. If you’re a fan of heavy, sludgy doom metal, you need to get to know this band. Mr. Lorenzo spoke with us during a recent phone interview about the band, the new album, his past bands, and the future of Vessel of Light.

I’m familiar with your previous bands, Non-Fiction and Hades, and I still listen to albums from both bands to this day. What happened to each band?
Hades’ first album, Resisting Success, came out in 1987 and we put out two albums. That’s when we were at our most popular probably, in 87–88. And then Hades broke up in 1989. We fought a lot and then broke up. I started Non-Fiction because the guys in Hades didn’t want to tune down, and I did. So, if you love In the Know, you’re probably going to love all of the four Vessel of Light albums because they’re very similar musically. Then Hades got back together in 1999, and we put out $avior$elf and then we put out my favorite Hades record, the next one, called The Downside, that was also on Metal Blade. To me, that’s the best Hades record. Then we did one more record for Metal Blade. We got Ron Lipnicki in the band, then Ron got cancer but he got better and then he joined Overkill for 10 years. Then when he was done with Overkill, I had him join Vessel of Light. When anything stops being fun, whether it’s a job of mine, my relationship, or my band, I stop doing it. If it’s not fun, I just don’t see the point of it going on. I’m a little bit childish like that. But I’ll tell you one thing, Vessel of Light has been fun every second of the day the last three years. Even though Non-Fiction and Hades were my more popular bands, I never put out four records in a row with either Hades or Non-Fiction. Vessel of Light is the first band I’ve done that with. But I’m glad you remember my old bands, that’s nice to know!

You mentioned Non-Fiction having musical similarities with Vessel of Light, and that’s noticeable while listening to Last Ride. Is this type of sound or riffs just in your DNA, or were you trying to get away from that type of sound with this band?
When Hades started, I was really listening to a lot of Judas Priest, Slayer, Exodus, and Metallica, and I was definitely trying to impress the musicians around me in the band. I’m not a great musician, but I think I write great riffs and I think I’m a great songwriter. When Hades broke up, I was done with guitar solos—I want to be a one guitar band, I want to tune down, and I want to write short, heavy songs. As much as I love a band like Black Sabbath, I don’t smoke pot and I have a very short attention span, so I’m not interested in writing a seven minute song. You might not know, but in 2007, I did a record with Bobby Blitz called The Cursed Room Full of Sinners, so that record to me sounds like Non-Fiction and it sounds like Vessel of Light. I would say yes, that is in my DNA, writing that style of riffs.

“MY INFLUENCES AND MY SONGWRITING AREN’T REALLY INFLUENCED BY ANY BAND EXCEPT FOR BANDS IN THE 70S.”

The Ride sounds like Black Sabbath meets Alice in Chains. And I say that because of your massive doomy riffs mixed with Nathan’s soaring, layered vocal harmonies.
The harmonies are Nathan, and I write the music. I’m too old to be influenced by Alice in Chains. Dirt is a phenomenal album and one of my favorite albums, but my influences and my songwriting aren’t really influenced by any band except for bands in the 70s. Nathan is a lot younger than me. Nathan is only 34–35 and he loves Alice in Chains. He loves a lot of underground hardcore bands that I’m not familiar with. He loves a bunch of underground metal bands I’ve never heard of. On all three albums he sounds different I think, vocally. He has a lot of nuances to his voice. Nathan can do a lot of different things. I don’t know if you’ve heard Nathan play in Ancient Wisdom, but they’re awesome. On this album, I was really surprised because I would get rough demos from him and there were a lot of vocals here. Like, how’s my guy going to mix this? But I think everything came out really great and I couldn’t be happier with everything Nathan did, from his melody lines to his lyrics. I think it’s pretty genius.

Vessel of Light has been very prolific, releasing albums since forming in 2017. How can you keep up this pace?
For Woodshed, Thy Serpent Rise and now Last Ride, I do all my guitar parts first to a click track. So, I went in and recorded 13 songs before the Coronavirus shutdown happened, then I wrote four more songs. So, I had to wait till the studio reopened and I recorded 17 songs for this record. My bass player Jimmy Schulman and my drummer Ron Lipnicki, they recorded 15 of them and Last Ride is the first 10 songs that Nathan wrote lyrics and melody lines to. I could record the fifth album for Vessel of Light next week! I don’t know what’s going on, but when I pick up a guitar, I write a riff. It gets easier and easier. Sometimes I’ll wake up at two in the morning to go to the bathroom, and I’ll hear a really cool riff in my head and I’ll just go upstairs and start playing it. Then I have just too many songs!

“I COULD RECORD THE FIFTH ALBUM FOR VESSEL OF LIGHT NEXT WEEK! I DON’T KNOW WHAT’S GOING ON, BUT WHEN I PICK UP A GUITAR, I WRITE A RIFF.”

You previously played with bassist Jimmy and drummer Ron in Hades, but what’s the camaraderie and musical chemistry like with this band?
Ron is the easiest guy to get along with. He’s in about 300 bands, but Hades DamNation was his first album, which came out in 2001 on Metal Blade. And I put out three solo albums with him, so we’ve been friendly for 20 years. And Jimmy Schulman and I first met in 1985 and we sometimes butt heads, some say because we’re both Capricorns or whatever, but Jimmy’s like a brother to me and vice versa. Whenever I start a band, he’s probably the first guy I think of to play bass because I love his positivity. He’s a very creative bass player. In Hades, I thought he overplayed, but he really comes up with some things I never would’ve thought of. The four of us when we’ve done shows together, or we’re just hanging out between shows, we get along really well. Our first show was two years ago opening for Life of Agony at a sold out Valley Ballroom in New York City, and Nathan our singer lives in Cleveland. So, he flies in for the show and we were on stage playing in front of a sold out crowd, and Ron and Jimmy only met Nathan two hours earlier. We never had rehearsed the four of us together before our first show and it came out perfectly.

What does the band name signify?
Nathan thought of the name. Originally, he came up with the idea of Vessel, and we looked up Vessel and there was another band called Vessel. So, he was like, “How about Vessel of Light?” Nathan’s a Satanist and I’m a Catholic. I watch the Forensic Files TV show a lot, and I told Nathan you can’t sing about Satan, I don’t want that in my songs. So, he started thinking about true crime stories and there was this supposedly religious guy in New Jersey who thought that the world was becoming a bad place and he killed his whole family, then ran off and tried to change his identity. He thought he was killing his family so that he’d go to heaven. In not quite the literal sense, but he thought that he was a vessel of light, he thought he was doing his family a favor. So, it’s kind of what the name means but not really. Nathan would probably explain that better than me. I don’t even think about these things too much, I just care about the music.

There’s a scary, frightening atmosphere on these tracks, almost like a horror movie, most notably on “The Death of Innocence,” “Voices of the Dead,” and “Torture King.”
Well, I’ll tell you this, I couldn’t agree more! I know people who have heard “Torture King” and said they don’t want to be home alone while listening to that song. It scared the shit out of them. And I don’t blame them. It just seems to go together. When I write these angry, depressing riffs, even though I’m a happy guy, it just seems to work though, the horror theme. Nathan was the one who came up with that whole concept of writing horror lyrics for Vessel of Light. So, I’ve got to give him credit for that.

“WHEN I WRITE THESE ANGRY, DEPRESSING RIFFS, EVEN THOUGH I’M A HAPPY GUY, IT JUST SEEMS TO WORK”

Being a Jersey boy, what’s the metal scene currently like there?
I’d say it’s nothing fantastic. There’s little pockets. It’s certainly not like it was when Hades would do our shows when we got back together for Metal Blade. There were clubs up here by me that would hold 600 people, and we’d have 500 people come to a show. It’s not like that anymore, even before the Coronavirus. There’s fewer and fewer places to play. It’s not what it was, I’ll tell you that much.

Due to unforeseen uncertainty of the ongoing pandemic, what will you be mostly focusing on going forward?
Nathan’s flying in here, and we’re going to do a video for “Torture King.” We’re going to have a band rehearsal with all four of us for only the second time. The two of us will be doing some radio and TV interviews, trying to promote the album as best as we can without being able to play shows.

LACUNA COIL: Releasing the Anima to the World