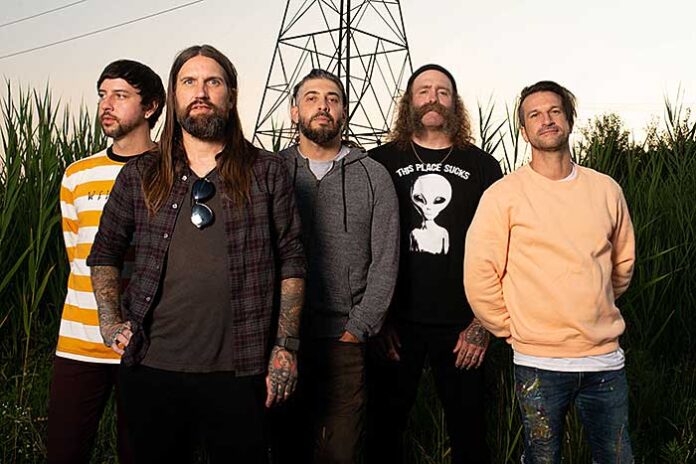 Keith Buckley has never been one to mince words, nor is he lacking in the creative output department. Frontman of hardcore meets metalcore luminaries and Buffalo’s favorite sons Every Time I Die, Buckley has seen the industry morph and change for the better part of three decades. He’s seen the highs, the lows, and the neutral zones of the wayward spirits, and has counted himself in all three categories at times.

On Every Time I Die’s ninth studio album Radical, rebirth is as much a buzzword as any descriptor surrounding the band since their humble underground beginnings. “I’ll be honest. I’m surprised I’m here right now,” Buckley opens candidly in a one-on-one with Outburn.

“I’M TAKING THEIR SONGS AND MAKING THEM ABOUT THINGS THAT ARE VERY HARD FOR ME TO SING. WHY WOULD I DO THAT?”

“After Low Teens [2016] was done, I was like I can’t do that again. I can’t do that to myself and I can’t do it to the band either. The thing that most people ask about when they think of Low Teens, or at least ask me about, is the lyrics, obviously. But there’s so much amazing musicianship there that I almost feel at this point like I hijacked it. And all of these things that these guys didn’t write about, I wrote about them. So now I’m taking their songs and making them about things that are very hard for me to sing. Why would I do that? We’re a live band.”

Cracking under the emotional heft of the material on Low Teens, Keith went back to the drawing board for Radical, delving into a heavy yet decidedly less serious tone and tenor, one that mirrors the band’s energetic and fan centered live performance.

“People used to like Every Time I Die because it was fun. I used to have fun and we used to have fun. Everything has become so fucking severe because of the state of the world and the record we’re coming off of. Everything became so cold and impersonal, except to each other. Everyone had their own fire, but they just weren’t sharing. And I felt Radical was a way to share that fire again and be like, ‘Hey, this is something that I feel internally, but I believe you could also feel it if you open yourself to it,’” the frontman shares.

“IT’S A VERY RADICAL CONCEPT TO, INSTEAD OF GOING FORWARD TO FIND OUT WHO YOU ARE, GO BACKWARDS.”

“And I also believe that if we all open ourselves to it, the scene, the hardcore scene, could enact some very real change on a social level, if you start with a personal change. As a summation of everything about this record, I wanted it to inspire people by reminding them of what they used to be. And it’s a very radical concept to, instead of going forward to find out who you are, go backwards. Strip things away to find out who you are. That’s really what the record is about. Not only did I want to set it up where I could play these songs front to back, but I wanted to make sure that we had a good time doing it.”

Explaining that “the lyrics are sometimes just silly to be silly,” citing the nod to 120 Days of Sodom in “Sexsexsex” as a prime example, Keith scribed an album that’s a marriage of a more positive outlook, an acceptance of the desire and potential need for change, and the inspired idea to incorporate humor into what has at times been a dark and brooding discography.

“What became so clear to me that I have never thought of before was if you take an album like Low Teens, that’s just very serious, sad, and heavy, all you have to do to change the vibe of that whole record is to add one joke. One joke will change the vibe of that whole record. Going to Radical, at some point I realized that if I really wanted it to be different from the other Every Time I Die records, especially Low Teens, I needed to bring humor back, because humor is the one thing that can make the worst situation in the world feel like it ain’t so bad,” he explains.

“I NEEDED TO BRING HUMOR BACK, BECAUSE HUMOR IS THE ONE THING THAT CAN MAKE THE WORST SITUATION IN THE WORLD FEEL LIKE IT AIN’T SO BAD”

“I wanted to keep giving these hopefully empowering messages, but do it with humor so that I can Trojan Horse it in there. People can let their guard down and take on these kinds of radical ideas for change, which are actually the most simple things ever.”

Change and adaptability have been at the forefront of the life of the vocalist turned published author and educator. Buckley and his Every Time I Die brethren—Jordan Buckley (guitar), Andy Williams (guitar), Steve Micciche (bass), and Clayton “Goose” Holyoak (drums)—have weathered industry hurdles and a worldwide pandemic, largely by remaining flexible.

Keith’s productivity has been well documented, fronting supergroup The Damned Things and releasing two acclaimed books to his credit, while Williams moonlights as The Butcher in rising pro wrestling federation All Elite Wrestling. But between every hustle and side venture, the Every Time I Die mother ship always looms large.

“WE WERE AS DEVOTED TO THE BAND AS WE WERE TO BEING ALIVE. LIKE IF YOU WERE ALIVE, YOU WERE LIVING FOR THIS BAND”

“Asking us to not be in Every Time I Die is like asking you to not be you. That’s just what you’re born with, who you are, and how you live. So that couldn’t be undone for us. And we were as devoted to the band as we were to being alive. Like if you were alive, you were living for this band. And that was something very cool to capture,” Keith shares candidly, while explaining that during the pandemic he and his partner have made the choice to move into an RV, opting for a closer life on the road as opposed to the rigors of distance.

“During the pandemic, I was, ‘Okay, let’s figure out what we want to do.’ And we looked at the way that I tour and it’s like I don’t like this. Okay, well, after we’ve made these pros and cons, it seemed like a logical conclusion to get an RV and not ever live in a house until we can afford a house. People tour right now and leave their house and leave their partner or leave their family and do nothing but worry about them, like I did. I worried about them from the second I opened my eyes to the second I closed my eyes. And the day was just what can I use to distract myself from the worry? Because the worry then leads to guilt, like I left them behind. So now I’m guilty and I’m worried. Okay, now I’m walking around guilty and worried and I’m sick of feeling this way.”

Reflecting on the 20th anniversary of Every Time I Die’s debut album Last Night in Town, Keith shares that the sound and substance of the songs reflect a young man who was in a very different and altogether more uncertain phase of his life.

“I WAS FORCED TO LOOK BACK ON IT AND DISCOVER WHAT IT WAS IN THOSE SONGS THAT MADE ME WRITE IT IN THE FIRST PLACE.”

“I personally don’t feel like it’s a great album by any of my standards now,” he admits. “We were experimenting. None of us really knew that we would be in a band for 20 years. We didn’t put enough thought into it. We were just kids playing music that got presented with an opportunity that we took. That’s all I would ever say about the record. But now knowing what it led up to, it was so important because the more it aged, the more I was forced to look back on it and discover what it was in those songs that made me write it in the first place. So now I look at it and look at the songs. Already in 2001 I was in a bad spot. I look at it like, ‘Oh, this dude, this fucking whatever 21-year-old guy, he’s lost, like already he’s fucked.’ I know these songs. I remember where I was, and now knowing everything that would follow it, I see a guy that was totally ignoring his instinct and totally ignoring his own gut feeling about things and was so tormented by it that he was writing songs about the disparity between what he knew he wanted to happen in music and what was actually happening in music. If I look at the tracklisting now, this is the culture shock of a kid who was, ‘I’m just in a fun punk rock band, and now it’s like oh shit, no, no, no. This is a thing now that I need to be investigating seriously. I need to be taking this seriously.’ It’s a dude who sat down to take a record very seriously. Really confident in his ability, but confused in the way that the world was going to approach him. That record is necessary, and I definitely feel bad for that person that wrote those lyrics, for sure.”

With lengthy tours on deck post-Radical launch, and a new, more emotionally cleansing writing and recording process in the rearview, Keith Buckley and Every Time I Die march into the future, as ever the road warriors we always knew, with a renewed outlook and energy. This time though, all hands put self before the whole, without sacrificing that passion and desire.

“I DID SO MUCH WORK AND I SUFFERED FOR SO LONG. I NEGLECTED SO MANY THINGS IN MYSELF AND IN OTHERS.”

“I did so much work and I suffered for so long. I neglected so many things in myself and in others. Let’s see now if I can give that work the space to actually grow, because I feel like I didn’t, and I wasn’t following advice that I’ve always given to other people, which was that you have to let your albums breathe. You can’t put out another record so fast on the tail of another because that one might not be done breathing and you’re adding another one to its space. So, it’s constricting and it’s sharing its space with something else that also needs its own space,” Keith shares openly.

“You’re harming both records by putting them out so quickly. So, I’ve always been an advocate of just letting them breathe. And then when it’s time, we’ll know it’s time. And so that’s the approach I’ve taken to myself now. Yes, I want to write more books. Yes, I want to write screenplays. Yes, I would love to write another The Damned Things record or whatever comes into my world, but I’m going to let it happen now. I’m going to sit here, knowing what I know about who I am and what I’m good at and see what happens instead of going out and aggressively getting it, because I was killing myself going out and aggressively getting it. Maybe that was the wrong approach. Maybe the right approach is sitting back, being still and silent, and seeing what gravitates towards me now.”