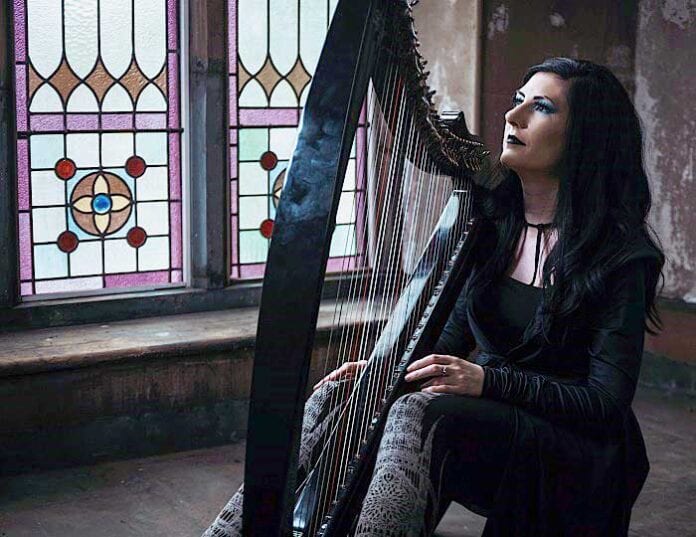 We had the wondrous opportunity of picking the mind of musician Lindsay Schoolcraft, with readers likely recognizing Lindsay from her role in metal act Cradle of Filth. Since her departure from Cradle of Filth, Lindsay has dove full throttle, uninterrupted, into her own project. Worlds Away is the newest musical extravaganza to come from this talented musician’s skill, and we conversed on all things pertaining to this collection of songs.

With the anticipated release of Worlds Away having come to fruition, Lindsay tells us, “Worlds Away is a style of album I have been wanting to release my entire career.” The fans responded in kind, with the feedback being overwhelmingly positive. “People seem to really be craving these softer sounds, considering the state of the world at the moment. This album is different, and I wanted to go in more of a calm and relaxing direction for the composing. It is definitely a softer image. I’d like to let the listeners create their own vision of the songs as they journey through the album,” Lindsay discloses.

“IT WAS BJÖRK’S VESPERTINE ALBUM THAT REALLY STARTED IT ALL FOR ME AND LED ME TO THAT FIRST HARP.”

To get back to her roots, Lindsay is known well for being an “ethereal gothic metal solo artist” from Oshawa, Canada. As a multitalented singer, harpist, and pianist, she composes music inspired by her life experiences, as well as that which has heavily influenced her over the decades. “I think there has been a calling for me to play the harp most of my life. I have always wanted to own one of those giant grand concert pedal harps, but they are just as expensive as a grand piano. Harps aren’t that common, so attaining one as a child was not exactly what I thought possible. I did finally get my first harp when I was going into university as part of my folk studies. It was Björk’s Vespertine album that really started it all for me and led me to that first harp.”

Touching on the fact that this album embodies the sound that Lindsay has been craving to put out into the world, we asked her what inspired its creation. “I had been wanting to write an acoustic type album most of my career, but never really found the time or enough songs. Sure, I always have softer ballads on each album, but when the pandemic hit and I was locked inside, I just knew it was the time to do this. The production took about three months, and I am lucky to say my producer and engineer is my neighbor! It was a long haul and lots of work, but I am glad I committed to it and it was completed when we finally came out of strict lockdown.”

“WHEN THE PANDEMIC HIT AND I WAS LOCKED INSIDE, I JUST KNEW IT WAS THE TIME TO DO THIS.”

As much as the sound makes the album, the entire presentation impacts the perception as well. Worlds Away features gorgeous artwork by Anastasia Solti, who had also created the artwork for Lindsay’s debut album Martyr. “Anastasia is a brilliant illustrator and animator from Russia. I was so happy to hear she wanted to come back and do the artwork again. I sent her the album and let her draw her own conclusions on what she thought the artwork should look like. Again, she nailed it and never disappoints!” The beautiful colors and fluid lines tie hand in hand with the melodies featured.

Worlds Away puts itself on the musical map for old and new fans alike through a lovely music video release. With cold color tones and beautiful natural light, Lindsay dreamt up the video around the time that the album was done being recorded. “We were originally going to film the concept in my backyard due to the pandemic at the time, but we found a local farm that was happy enough to give us a spot that is part of their yearly Halloween trick or trick run. It was something we pulled together very quickly, and I feel it fits the mood of the song. I am so grateful it even happened because at one point it looked like it wasn’t even possible for us all things considered.”

With live music currently on pause due to the pandemic, some artists are diving into livestreaming to make up the void. When speaking to Lindsay about this new virtual experience, she says, “I am still trying to figure this out myself. I am an all-or-nothing person when it comes to live music, and me performing on my harp from the corner of my bedroom to my cell phone just isn’t cutting it. I have done a few small lives and the fans seem to like them. But I currently would rather focus on writing and recording since I choose to take this year off to do so. I have so much music in my head right now that is scratching to get out.”

“I HAVE SO MUCH MUSIC IN MY HEAD RIGHT NOW THAT IS SCRATCHING TO GET OUT.”

That being said, Lindsay has been busy not just with her most recent release, but with another passion project called Antiqva. Antiqva is a chamber black metal project founded by Xenoyr (Ne Obliviscaris) and Lindsay Schoolcraft. This project features an experienced ensemble of past, present, and live musicians from well established bands—Ne Obliviscaris, Cradle of Filth, Negator, Karkaos/Blackguard, Black Crown Initiate, Susperia/Abyssic, and The Ocean. Antiqva hopes to pay homage to an old organic sound while bringing to the fore the varied influences within the band. Antiqva promises to deliver a first single in December. “It has been a long time coming! We knew what direction we wanted to go in for our sound, but we are happier than ever with the results. We’ve been coined as chamber black metal with a smaller, more intimate, and expressive string section. Along with chanters, Xen’s roaring voice, and Fabian’s approach to traditional black metal on guitar, we are getting the formula we wanted right. I can’t wait for everyone to finally hear it.”

Having been involved in some amazing projects in the past, all of which shaped her into the musician she is today, Lindsay says, “I have been blessed with many opportunities and experiences, and with going into them with the mindset of ‘always the student, sometimes the teacher’ is what has helped me enjoy, appreciate, and get the best out of those moments.”

“BEING A SENSITIVE, CREATIVE TYPE IS OVERWHELMING AND SOMETIMES VERY ISOLATING.”

With her own musical journey teaching Lindsay many lessons and skills, she has also been offering online mentorships and enjoyably conversing with aspiring musicians, fostering a community of artists. Lindsay spoke to us about lending her voice, “Being a sensitive, creative type is overwhelming and sometimes very isolating. I have felt very alone in most of my creative endeavors and business plans. I think I have a lot to offer in regards to advice and getting organized. But I also do it so musicians don’t feel alone and have a friend to help them get their creative business ideas organized. It mainly boils down to confidence, something that is practiced, and I am happy to be there to help other artist’s build that so they can attain their creative vision.” As well as this, Lindsay has also been very open about her mental health on social media. According to Lindsay, her fans have, “Expressed they appreciate it. I know a lot of others who follow me suffer, and I think by speaking out about it we end the stigma around it.”

Where does Lindsay go from here? “I am working on a few singles for my solo work that I plan to release sometime next year, but for now all of my focus is going into Antiqva and us completing our debut album”

MACABRE: Pogo On A Stick