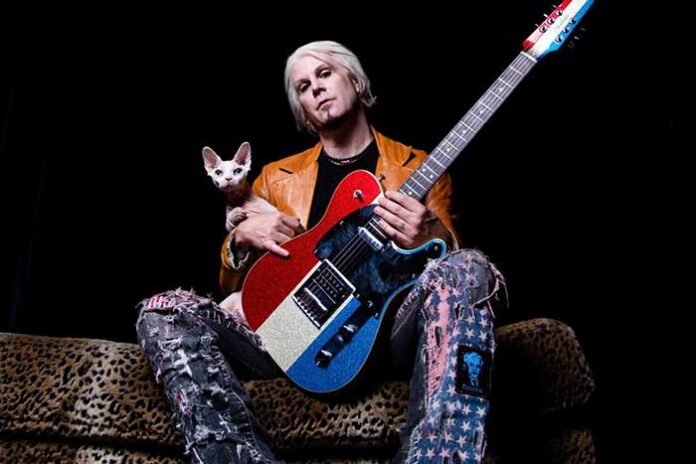 INTERVIEW WITH JOHN 5 BY KELLEY SIMMS

“There’s a little sinner in all of us,” guitar maestro John 5 explained during a recent interview about the title of his newest solo instrumental album Sinner.

John 5 (real name John William Lowery), the current Rob Zombie guitarist, boasts one of the most impressive and diverse résumés in rock and metal, playing with the likes of Marilyn Manson, David Lee Roth, 2wo, and Meat Loaf. John 5 also has a successful solo career.

On his tenth solo instrumental album, Sinner, he and his band The Creatures—featuring bassist Ian Ross and drummer Logan Miles Nix—perform a wide range of styles that encapsulates everything about his six-string prowess. Its 10 tracks run the gamut of metal, classic rock, funk, EDM, bluegrass, and country and western, which also includes a wonderfully melancholic version of Queen’s “Crazy Little Thing Called Love.” Plus, a few musical guests, including Megadeth’s Dave Mustaine, Butcher Babies’ Carla Harvey, and ex-KISS drummer Peter Criss, add to the album’s overall diversity.

Whenever John 5 composes a song, he admits that he likes to have a catchy vocal hook inserted into the instrumentation, which he gives as an example the vocal refrain in the classic Mexican flavored track “Tequila” by The Champs. Although the material that makes up Sinner are thoroughly instrumental songs, the cool vocal hooks in various places make the songs even more accessible. Case in point, the fourth track on Sinner—the funky “Que Pasa” with the iconic Mustaine—contains a massive vocal hook that’s so infectious and joyous that it proves to be the perfect match for the Megadeth frontman.

“My producer put this James Brown sample in there where he’s talking to the crowd, and he says, ‘Que pasa people, que pasa,’” John 5 explains. “It was so funky that he just put it in the song. We really loved it and it was really hooky. The record company said, ‘We can’t have James Brown on there, so who would you like to have?’ And I said, ‘I would really like to have Dave Mustaine,’ because I was listening to a lot of Megadeth at the time. I know Dave well enough to say hello to him if we’re doing a show together or something like that. I know his assistant, and I reached out to his assistant and said, ‘Hey, is this is possible? Can you ask Dave?’ He really liked the song, he was into it, and it sounded really James Brown.”

Searching for that melodic hook in each composition is key to John 5’s creative output.

“I want to make it interesting for the listener and myself,” he says. “To try and make a good hook out of it. I’ve had good luck so far. I’m so thankful and I don’t take it for granted. I’m just so happy with how everything’s been turning out for me now.”

As cliché as it might sound, the old “if it ain’t broke, don’t fix it” adage works well when describing Sinner. While composing an all instrumental guitar album, the toughest part is trying to keep the non-guitar listeners thoroughly entertained. John 5’s secret was to keep things simple.

“I’M SO THANKFUL AND I DON’T TAKE IT FOR GRANTED. I’M JUST SO HAPPY WITH HOW EVERYTHING’S BEEN TURNING OUT FOR ME NOW.”

“I wanted it super simple—guitar, bass, drums,” John 5 says. “I love playing live and I wanted this to come out sounding live, because that’s how we recorded it, too. It was all up to the performance. We had only a few amps and a few guitars, because of the fact that all my guitars and amps were in storage [due to Covid-19]. I couldn’t even get into storage. I did that whole record on one guitar.”

While at home, there’s hardly a moment when John 5 doesn’t have his guitar in hand. As he sits on the couch noodling about, probably for hours upon hours, he often records bits on his phone. According to John 5, his songwriting process is actually a bit primitive.

“I have my phone, I hit my voice memo, and I just record things,” he explains. “Sometimes if I want to do a harmony or double track something, I’ll get my wife’s phone and I’ll have a click. So, there’ll be one thing going on my phone, another thing going on her phone, and then I’ll be playing. I don’t want to have a studio in my house because I don’t think I’d ever leave the house. I’m always trying to create and do something special.”

“I DON’T WANT TO HAVE A STUDIO IN MY HOUSE BECAUSE I DON’T THINK I’D EVER LEAVE THE HOUSE. I’M ALWAYS TRYING TO CREATE AND DO SOMETHING SPECIAL.”

Sinner was produced and mixed by Barry Pointer at Riott House Studio in North Hollywood, while the drums were engineered by ex-Guns N’ Roses guitarist Gilby Clarke at Redrum Recording in Los Angeles. During preproduction, John 5 had all the songs flawlessly crafted before entering the studio and were recorded live.

“I wanted to start from the beginning, play it completely all the way through in a take,” he says. “I’m not saying one take or two takes, but I wanted to have one great take where we started at the beginning—no overdubs, no drop ins. And that’s how I approached it. It really was great because it took a lot of time and it took a lot of hard work. I trained myself going into the studio. It was like being in the Army or something like that.”

As previously stated, John 5’s musical repertoire is widely diverse and he’s always looking for new inspirations, often spending his free time seeking out new styles to use for his own compositions.

“I am someone that searches, looks, and investigates all different kinds of styles all the time,” he admits. “It’s one of my favorite things because you can never stop learning, and that’s very important to me. You can keep learning and keep pushing yourself. For some reason, that’s how I always have been. I’ve always been obsessed with pushing myself to the limit. That’s how I’m wired, but it’s one of my favorite things.”

“I’VE ALWAYS BEEN OBSESSED WITH PUSHING MYSELF TO THE LIMIT. THAT’S HOW I’M WIRED, BUT IT’S ONE OF MY FAVORITE THINGS.”

John 5 has also been involved in scoring several soundtracks for Rob Zombie’s films, such as 31 and The Lords of Salem. Although he enjoys scoring music for film, he prefers recording albums and performing live.

“I’m not really into doing movie scores,” he confesses. “I love doing Rob’s movies, and Rob’s are the only ones I’ll do. Movies and doing scores, it’s, ‘Don’t distract the listener from the movie.’” But I want to do just the opposite. I want to distract people, go on tour, and play. I look at it as music that is not supposed to be listened to. It’s just who I am. I like to be on tour. I like to make records and things like that. I don’t want to make music that’s not going to be heard.”

Speaking of tours, due to the lingering pandemic issues, John 5 will only be playing one show with Rob Zombie in Daytona Beach at the Welcome to Rockville Festival on November 12. Although he doesn’t have anything planned for a solo tour for the rest of 2021, he’s planning a proper tour for Sinner in 2022.

“I haven’t told anybody, but I guess I can tell you,” he begins. “I was supposed to go on tour with Yngwie [Malmsteen], but I’m not going to do the tour because of what’s going on right now with the Coronavirus and all this stuff. It’s a mess out there and I’ve had some very close friends pass away. So, I’m gonna wait and see how everything turns out. It’ll be 2022 that I’ll do a proper Sinner tour, and I’m going to have a really cool new stage show. It’s going to be great.”

JARBOE: The Journey That Stays With You