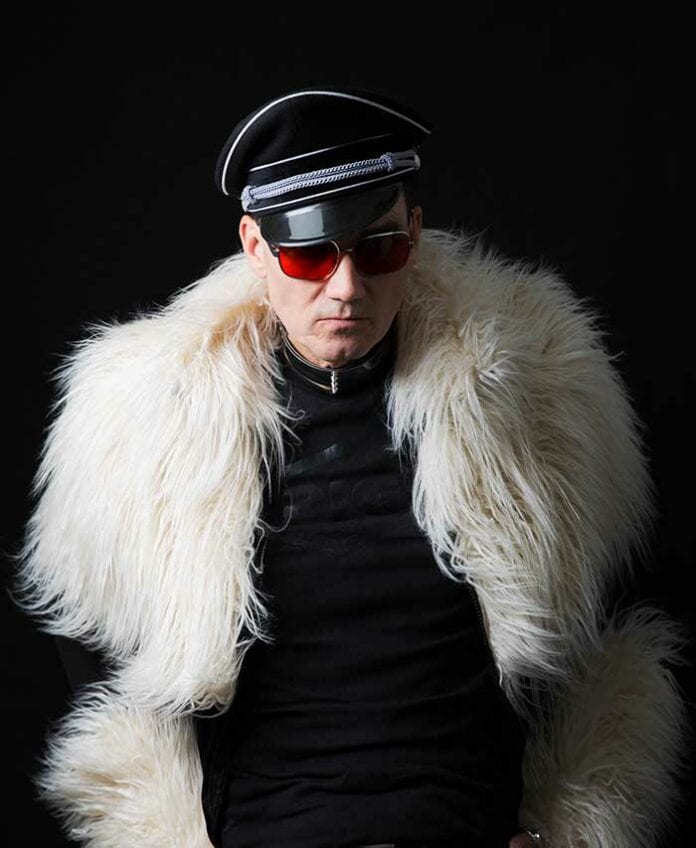 “‘MOBOCRACY’ is rule by the mob,” says Raymond Watts, mastermind behind post-punk stalwarts <PIG> about the meaning behind the title of his latest single and EP. “The song decries the meltdown of morality and the rise of mobocracy, which is fueled and whipped up by the poison that pours from the perma-tanned reality stars running the asylum, who cheer and steer the frenzy of bitterness, bile and hatred that is in turn fed by their own fear.” Biting and politically on-point, “Mobocracy” returns the hard-edged, serrated industrial edge to <PIG>’s sound, following the experimental and critically hailed covers album CANDY.

A limited edition EP release only available on the band’s upcoming North American Fall tour in a VIP package, the Mobocracy EP is a true limited edition in that each copy includes limited edition original artwork by Watts himself. “Each CD comes with hand drawn artwork that I designed to bring the TLC with which it was conceived, written, recorded and delivered straight into the hands of the eventual owner,” he explains. “Once that umbilical cord is cut and it becomes yours, you can do with it what you wish … Also included in the VIP is a unique tote bag, laminate and lanyard, set list and a new sheet of <PIG> slogans on stickers. The only place to buy this VIP package is through pigindustries.com.”

Its accompanying video was conceptualized by video artist Kill Switch Audio. “Bryan from [techno artist] Black Asteroid introduced me to Kill Switch Auto, who directed and treated the video,” he says. “When I saw his work, I knew his brutal and gritty visual aesthetic would be a perfect match for the song and its subject matter.”

Gearing up for a North American tour that kicks off in Toronto on Sept. 19th and concludes on October 6th in Minneapolis, <PIG> are preparing for another audio onslaught. (tour dates below)

“I am thrilled that Steve White, who fought the industrial wars with <PIG> on many albums and tours throughout the 90s (before his long tenure in KMFDM), is back in the centre of the sty on this tour,” beams Watts. “It’s great news not just for me but for anyone with even a passing knowledge of the band and the magic he brings to the monster. En Esch, who goes right back to our shared and formative years working with KMFDM, is back for this <PIG> tour, and I feel lucky to have nabbed him before his touring commitments as the main vocalist on the Pigface tour commences. I’m also honoured that Galen Waling, with his unflappable and rock solid rhythms, will be back behind the kit beating for the boar on this tour. He has recently been working and touring with Lords of Acid, Julien K and 16 Volt.

“So get out and see the Divine Descent Tour … or forever hold your peace.”

KILLSWITCH ENGAGE Release Live Performance Video of “We Carry On”