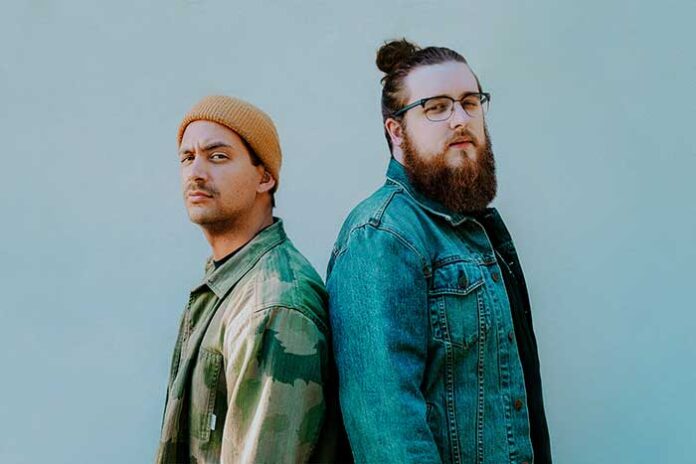 Portland collaborative project 09 sees EJ Olson and Chancelor Reeder bring a breath of fresh air to the scene, joining forces with a cross section of lauded vocalists to break down genre walls. With no permanent singer, the band’s new album Lost Years delivers a captivating and honest collection, with Matty Mullins, Donovan Melero and Kellin Quinn amongst the star-studded cast.

EJ: “Echoes” is the song that really sets the whole tone for the record. It’s about growing up and coming to terms with life changing around you, acknowledging that “maybe I’ve changed too, things aren’t the same anymore.” The only option in life is to let the past go and move forward. We had a few different artists collaborate on “Echoes” with us, and nothing really felt right—we decided not to force something that didn’t belong, and we ended up working out the collab with Rory pretty late in the album process. Hearing his take on this song for the first time was such a surreal moment—like “holy shit, this makes so much sense.” He made the song come alive, and the absolute pathos he’s able to communicate vocally was so perfect for the album opener. There are a few fun easter eggs throughout this record, callbacks to albums or artists that influence us—the drum intro to this song was directly inspired by the song “It’s Far Better to Learn” off of Saosin’s self-titled album.

Chancelor: When we were writing “Echoes,” I was definitely inspired by Saosin at the time, thinking back to a lot of their earlier stuff, but especially their self-titled album, which was a huge influence on us. Some of those drum parts and especially a few of the riffs were directly inspired by those guys.

EJ: The bones of this song were written by our good friend Bob Hall, who I’d spent years playing in a band with as a teenager. He’d just moved back to the west coast, and we were writing the last few tracks for the record—it just made sense to bring him into the fold and expand on the concept of the band, which is collaborating with artists who are important to us. This one is a little heavier, but runs the gamut and hits these low points before building back and exploding in the bridge.

Lyrically, this one was written about my experience during the pandemic, isolated from family and other loved ones. I took my experience and tried to put into perspective some of the conflict I was enduring—if something happened to me, or one of my loved ones, would we have regrets about the things we did or didn’t say to each other? It explores this idea of the world falling apart around us, yet we’re unable to look past some of those things and focus on what matters with each other and in our relationships.

Our producer, Justin Abel, really was the third member of 09 through this entire process. I’ve worked with him for years, but this record is the first time that I had the opportunity to sit down and actually write with him—about half the songs on the record, he and I wrote and demoed all the vocal parts together before we pitched to other singers. This is one of the songs where I think he was comfortable enough with our sound and what we were trying to accomplish that he could sort of step back and purposely break ‘the rules’ of what an 09 song could do. The bridge is so different for us, and that vocal hook was all his idea.

Chancelor: “Consolidator” was a really special song, because it was the only other track we brought in another guitar player to write for. After Bob started working on it with us—he pretty much wrote the structure for the song—it was really just fluid. It was so much fun just focusing on the leads and taking his ideas and running with them. My favorite part on this whole album is the bridge of this song.

Bob Hall: Getting to work with some of the most creative dudes I know was really a special opportunity for me. Writing “Consolidator” with EJ, Chance, and Justin was a blast all the way through, and really showed me why this album sounds so special. Working with Justin was such a pleasure and I appreciated how passionate he was about these songs as our producer. Getting Donovan on the track brought everything together in such a powerful way and truly took this song to the next level.

EJ: “Hollow Heart” was the first song that I took on most of the lyric writing responsibility for—it was daunting, but I had the opportunity to try something new, and the things I learned during this process helped inform the rest of the record. Lyrically, I’m exploring a few of the same themes that “Echoes” explores, but touching more specifically on a few relationships of mine, friends I’d lost touch with for various reasons—I was really writing from the perspective of my 19-year-old self, experiencing my first adult relationships falling apart.

The week we recorded this was so much fun—we did four days with Justin and Andrew, but also Malia Endres—it was like rock n roll summer camp, just hanging out and making music, solving creative problems with a rad group of artists and enjoying our time together. Andrew’s attitude is infectious, and Malia’s creativity is inspiring. We’re lucky to know such amazing artists.

Chancelor: Having Andrew on this song felt right, as EJ and I have both worked with him on numerous projects through the years. It was just fun to do something that was a little more on the poppy end of things. At the time, I had just discovered Don Broco, and I was obsessed with trying to find huge, chunky rhythm tones. That chorus is just a really nice mix of really fat guitars, but also a really poppy, catchy melody.

EJ: This was the inception of the whole project. I had the inspiration, the idea for our whole model, and the drive to make something happen—once Chance was on board, and we locked it in with Justin, we went down the list of singers we’d worked with in the past, and Jamie was the first person we gravitated towards. The time in the studio working on this song is to this day still the most fun I’ve ever had working on music. Jamie is one of the funniest guys we know, and he made the whole experience so easy for us. I came to him with an extremely personal topic, and he was able to relate to it, take it as his own and run with it. I don’t think I’ll ever again feel the pride I felt hearing this song back for the first time…the years away from these guys, compounded by the cathartic release of the things we wrote about—it was really important to me.

Chance: This is the first song we ever wrote for 09—EJ and I, when we first had the idea to start this project, we just said, “Let’s start with one song and see what happens.” I’ll never forget that week, having so much fun just being together again. It was a rekindling of a friendship at the time—it’ll always be one of my favorite songs. It represents the idea of doing this purely out of the love of the music, just doing it for fun. We said “we don’t care, let’s make what we want to make.”