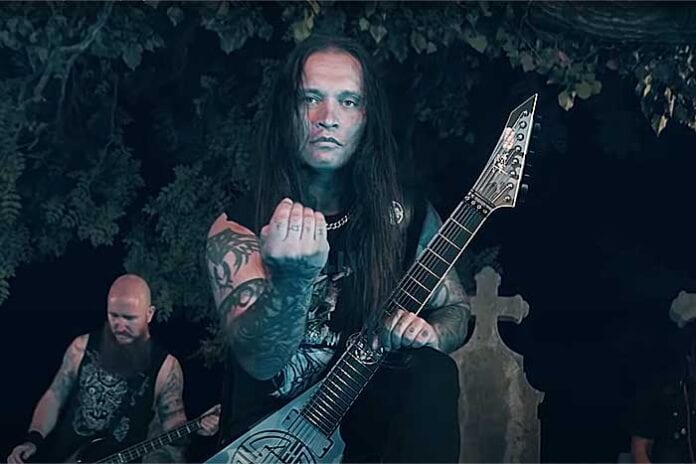 BY ZOLI FARKAS OF EKTOMORF

With the release of Ektomorf’s latest album, Reborn, on Napalm Records, frontman and fitness enthusiast Zoli Farkas tells us his list of the Top 5 Metal Workout Songs.

1. MACHINE HEAD “Davidian”
I just love the power in this song. Downtuned and heavy, absolute killer track. The midtempo gets me in the right mood for working out, even when I’m not feeling motivated. I remember when Burn My Eyes came out, it changed my life, probably like the lives of many other metalheads. Such an important record!

2. METALLICA “Damage Inc.”
This one hits the spot just like a pre-workout drink. Fist-pumping and aggressive, very supportive for lifting! Master of Puppets is responsible for who I am today. Absolute number one for me.

3. SLAYER “Angel of Death”
I don’t think this needs any explanation why—it’s just perfect for the gym! If someone doesn’t know why, definitely try this one while working out. Reign in Blood brought me into the world of aggressive music—dark lyrics, pure hate, and without any melodies. Slayer is definitely the best when it comes to this!

4. CANNIBAL CORPSE “Scourge of Iron”
Slow but extremely heavy! This one powers me up when I need it. Actually, the entire album is perfect for working out. The raw brutality and the guitar sound are simply insane. It’s awesome to have George [“Corpsegrinder” Fisher] as a friend and have his voice on “Evil by Nature” on Ektomorf’s Aggressor album. Makes me very proud!

5. METALLICA “Fight Fire with Fire”
Kick-ass start for a lazy gym day! Super intense! Love putting this on and cranking it up all the way! Ride the Lightning is one of my favorites by Metallica. I still can’t stop listening to it, even after all these years after its release!

Ektomorf returns to its musical roots and is Reborn under the sign of thrash metal after 26 years of existence. With their debut on Napalm Records, the Hungarian power machine transports the genre into a promising, modern era and sets itself free from any pigeonholes.

Since their debut, Hangok (1994), the four-piece around singer/guitarist Zoltán “Zoli” Farkas has regularly delivered new power to their devotees. Only three years after the release of their chart-breaking full-length, Fury (2018), Reborn ignites a blazing fire with its heavy sound and harsh lyrics that will burn any genre limitations to the ground. Their 15th studio album breathes the spirit of the “Big Four”—Metallica, Slayer, Anthrax, and Megadeth—while at the same time, beginning a completely independent new chapter of Ektomorf.