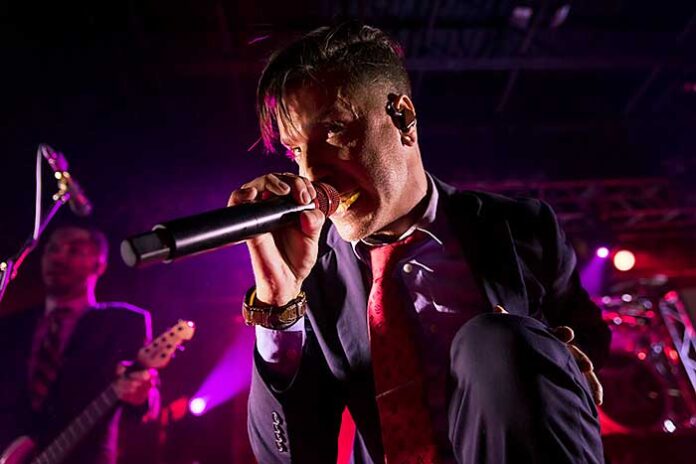 The date was November 28, 2021. The scene of the crime: Starland Ballroom in New Jersey. The Hip to Be Scared Severed Leg 2 Tour came slashing through, headlined by horror anthem juggernauts Ice Nine Kills with support from Bad Omens, Currents, and Fame on Fire. Announced in July, the date quickly sold out and with good reason.

Like a much-anticipated opening night of the next great horror flick, the line to get in was as far as the eye could see, all waiting to experience a night of headbanging and ear piercing sing-alongs.

Off the Hopeless Records lineup and proudly proclaiming they are “not a cover band,” Fame on Fire kicked things off with their genre-bending version of metalcore, pop, and hip-hop. A lot of energy came from the quartet out of Florida. Mostly known for their covers of popular chart songs, they proved to be just as catchy with their originals as well. The crowd was with them the entire set. As to not stray too far off course, they did perform their rendition of “XO TOUR Llif3” by Lil Uzi Vert and a very intimate rendition of “Numb” by the legendary Linkin Park.

Next up on the stage was the hard-hitting, progressive metalcore act Currents. Hailing from just a little up north of NJ in Connecticut, Currents cleverly mixes knockout breakdowns, bouncy choruses, and just enough synth to get the room spinning. Playing mostly tracks off their 2020 release The Way It Ends, the venue was shaking as they delivered a set to remember. So much so that us pit photographers were ushered out before the end of our allotted time because of the amount of crowd surfers coming over the barricade.

Following Currents would be a hard task for any band, but the Sumerian Records powerhouse Bad Omens showed up and in a big way. Gothic and dark, they opened with their newest single “The Death of Peace of Mind.” The crowd was hooked from the jump. Leading into what would be a cult-like sing-along for the entire set, Bad Omens crushed. I had little knowledge of them prior to this tour, but they gained a new fan in me with their goth inspired metalcore styling. I have been spinning their 2019 album Finding God Before He Finds Me nonstop.

With their recent release of The Silver Scream 2 through Fearless Records, Ice Nine Kills has been selling out venues at almost every stop on this tour. This isn’t a metal show. This isn’t even a concert. This is an experience. Masks, chainsaws, machetes, and even an actress portraying classic horror movie scenes that go along with the songs. It is impossible to not be completely enthralled the entire set with what you’re witnessing. Absolute masterminds of controlling a crowd.

Don’t look away! You don’t want to miss the severed head during “Hip to be Scared” or the chase scene during “Stabbing in the Dark.” Complete perfectionists, they do not miss a beat—not even a note. If you haven’t seen Ice Nine Kills live, you’re making “A Grave Mistake.”