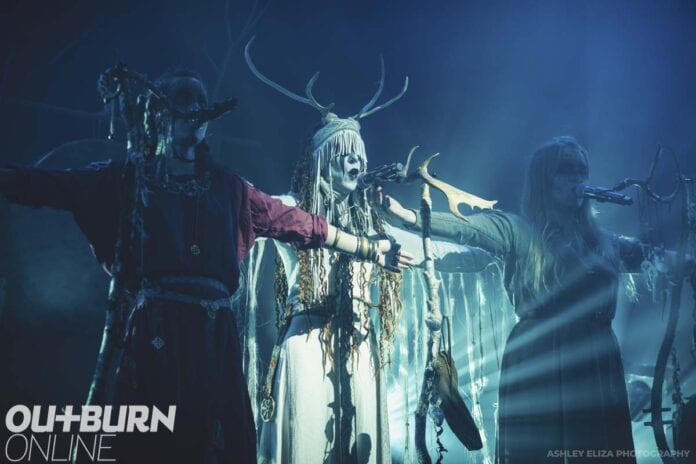 Cloaked in darkness, a single robed figure appears with a smoking chalice. He makes his way across the stage, slowly but with purpose, fanning the sage over the stage and out toward the crowd as a near perfect silence envelopes the room. More appear in the mist, clad in robes, adorned with bells, bones, and antlers. They form a circle at the stage’s center. The air is still. A meadowlark calls.

“Remember, that we all are brothers. All people, beasts, trees, and stone and wind. We all descend from the one great being, the one that was always there. Before people lived and named it. Before the first seed sprouted.” The smoke settles and the circle breaks.

A single voice cries out, the drums follow, and the crowd, as if pulled from a trance, roars. The ritual has begun.

Heilung, the multifaceted Dutch trio that defies classification and the restraints of modern music, has always danced softly to the beat of its own drum. Pulling influence from pagan faiths across the world, Heilung draws connections between different shamanic spheres across time and space, weaving a tapestry of interconnected sound and emotion, resulting in a final product that has left countless fans speechless since their formation in 2014, an experience that the members collectively identify as “Amplified History.” Fast forward six years to the modern day, and Heilung is in the midst of their first American tour, a testament to the power of spirit and the band’s unyielding drive to preserve their own utterly unique message.

As the opening ceremony ends, the real festivities begin. Smoke fills the room, droning, skin drums pound for what seems like hours, never missing a beat. The trio, surrounded by half a dozen other dancers, quickly falls into an flawlessly practiced rhythm. The band starts off with “In Maidjan,” followed by “Alfahhirhaiti” and “Krigsgaldr,” a fitting reflection of the shamanic Dutch act perfectly showcasing the synchronicity between the three. Juul, a master of percussion and ambience, sets the tone and the heartbeat for the ritual with imposing precision, carefully dividing his attention between a plethora of traditional Norse and shamanic instruments from around the world in order to create the perfect atmosphere for their uniquely primal act. Simultaneously, Faust begins to throat sing, a guttural masculine sound from the bowels of the human conscious that can be balanced by the divinely feminine energy that exudes from the ethereal melodies coming from his vocal counterpart, the talented Maria Franz.

The band’s show seems to reflect their own personal journeys in an odd way as they drift into “Hakkerskaldyr,” a raw and powerful representation of the band’s first album, Ofnir. Smoke swiftly circles as the performers seem to enter a trance, drums steadily building. The crowd has had time to process what they are witnessing and begins to awake in a similar fashion, falling into identical rhythm as the stage and the floor become one. Warriors join the trio on stage, pounding shield and spear in time with the percussion, a complete sensory overload that ends as organically as it developed, sinking back into the darkness from whence it came. The crowd is now infatuated, and Heilung would not have it any other way. As the drum fades and whispers return to the room, the skin drum calls again.

If the first three songs were an introduction to the group, the next three are a reminder of their versatility. As the band moves forward into “Norupo,” “Othan,” and “Traust,” the entire atmosphere in the room changes. Guttural growls are replaced by Maria’s haunting melodies, accentuated by beautiful flute and rattles, instruments that insight visions of the American Indian ghost dancing to a dying sun amidst the Great Plains. The band’s ability to delicately draw on the music and sacredness of other pagan cultures around the world and mix it with their own Norse roots in a respectful, impactful way is a major feat within itself, an accomplishment to not be taken lightly.

With the conclusion of “Traust,” the group moves into their final three songs, culminating in the grand finale that is “Hamrer Hippyer,” a chaotic and passionate celebration of everything the group embodies. Drums pound, sage smokes, dancers dance, voice melds with voice, and all becomes one in this final 14 minute ritual, an experience that has to be felt to be understood, an experience that defies description, an emotional rollercoaster that falls halfway between a sun dance and a séance. Tonight the crowd has been spiritually transformed. In this moment, all are happy, all are one, Heilung is victorious. They have accomplished what they came to do and with that, the ritual is concluded.

Heilung literally translates to healing. This outspoken trio from Denmark has found their way into the hearts of countless fans of all backgrounds and faiths from every corner of the world. They are more than musicians, they seek to bridge the spiritual gaps we have needlessly spent centuries reinforcing between all our respective cultures, all over the planet. Their message is simple.