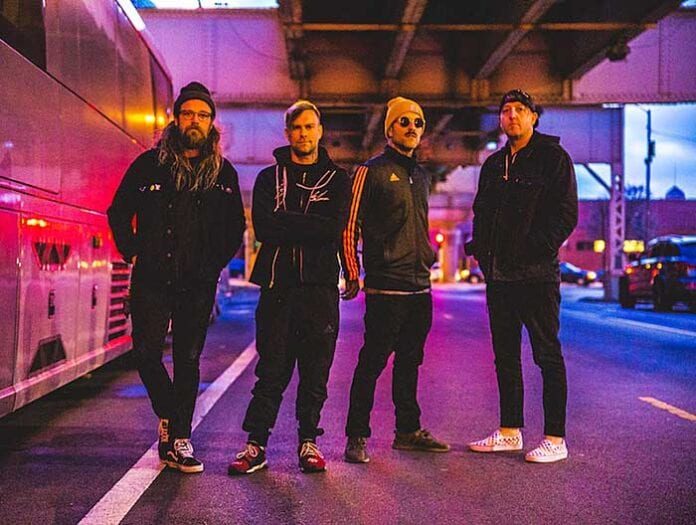 After months of anticipation and teasing with fans, The Used have officially announced they will be releasing their 8th full length studio album, Heartwork, on April 24th via Big Noise.

In addition to today’s announcement, The Used have released the second single from the forthcoming album, “Paradise Lost, a poem by John Milton.” The song and accompanying video are larger than life and carry emotions and imagery so unique to The Used throughout, while tying in influences from one of front man Bert McCracken’s favorite authors.

“I’ve always been a bit obsessed with Paradise Lost,” shares McCracken. “I really dug deep into the poem and its author, John Milton. As I was reading a lot of his political essays I realized that a lot of what ‘Satan’ says in Paradise Lost are quotes directly from John Milton’s own mouth. A lot of people thought he was the devil back then. He had a huge problem with the show of opulence from the Church. He thought it was disgusting. His poem is about the failed revolution against the Church of England, which is Satan’s failed revolution on earth. And what’s more incredible or exciting than a failed revolution?”

Fans can pre-save the new album and stream the new single today at https://theused.ffm.to/heartwork.

Heartwork marks the return of John Feldmann to The Used family as he is producing the album and also the head of A&R at Big Noise.

“I couldn’t be more honored or grateful to have one of my favorite bands of all time at my record label! They are one of the most influential bands of the last 20 years and we are making a career-defining album at the minute,” shares Feldmann. “They are one of the best live bands I’ve ever seen and Bert is quite possibly the best singer I’ve ever worked with. This has been a dream of mine since I met them in 2001.”

Feldmann signed The Used to Reprise Records in January 2002, one short year after the band formed in Orem, Utah. He also produced some of the band’s most monumental albums including their self-titled debut, Maybe Memories, In Love and Death, Lies for the Liars, Vulnerable and Imaginary Enemy.

On Heartwork, McCracken shares “The new album plays on the emotions, the sincerity, and the vulnerability of the first record and In Love and Death, with a little bit of the flair from Lies for the Liars.”

“Standing in the streaming circle pit with Kesha and Halsey, the album is just as modern sounding. John Feldmann’s production is that professional. It sounds really good. Those are two really random examples, but I think if you listen to both of those records, the songs are all over the place: dance, pop, actual punk rock riffs and drums. I think music is so all over the place right now that The Used fits in perfectly.”

The band is currently on the road for a completely sold out intimate tour with support from Dragged Under. This up close and personal show is unlike any other Used show you have seen. The band has spent the last couple of weeks performing previously released single “Blow Me (Feat. Jason Aalon Butler)” live. Itis frenetic and explosive while showcasing the undeniable vocals of front man Bert McCracken and has absolutely taken these small rooms by storm.

A full list of upcoming tour dates can be found below with more information available at www.TheUsed.net.