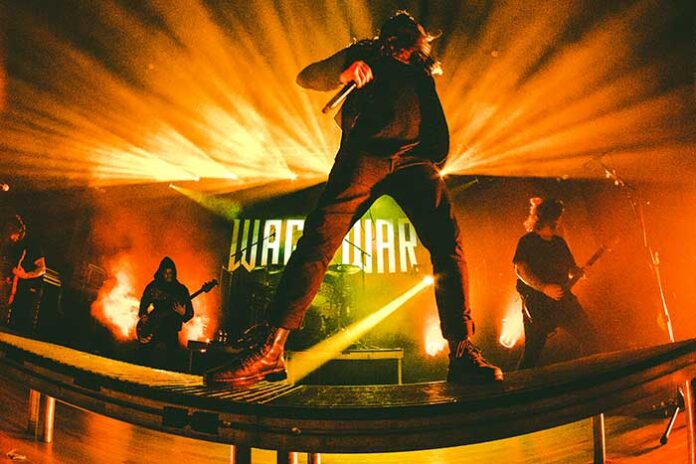 On Tuesday, May 3, eager concertgoers lined up outside of the Webster Theater in Hartford, Connecticut for an incredible metalcore lineup featuring Chamber, Gideon, While She Sleeps, and headliner Wage War.

As fans filed into the venue, Nashville, Tennessee’s own Chamber took the stage. This brutal five piece, only five years young, brought incredible energy to start the evening. They encouraged fans to get moving with circle pit after circle pit. As each song came and went, the crowd increasingly grew an appetite for all the talented musicians to come.

Following Chamber was the beloved American metalcore band Gideon. The intensity Gideon brings to the stage is unmatched, vocalist Daniel McWhorter screams each lyric with complete and total passion. The band closed their set with “Bite Down” off their 2019 album Out of Control. The hip-hop inspired metal had fans captivated by the band’s performance, many of which were seeing Gideon for the first time and definitely not the last.

Up next was While She Sleeps, a band far from their home of Sheffield, England. This metalcore group is unlike any other. Each member brings their own energy that blends perfectly together. Between the running and jumping all over the stage and even into the crowd, there was not a single person with their feet on the ground during this performance. Bassist Aaran McKenzie had no hesitation as he lunged into the mosh pit and began playing and dancing with the entire crowd. In a blink of an eye, vocalist Lawrence Taylor jumped off the stage and began crowd surfing and greeting fans without missing a beat. The interaction between the band and their fans was truly admirable. The band’s set featured multiple songs from their 2019 album So What. “The Guilty Party” was clearly a crowd favorite as many rushed to scream every word with Taylor. Though no one wanted the set to end, the room was full of anticipation for the main act of the evening Wage War.

The stage remained dark as it filled with smoke and Wage War’s banner was revealed. Fans all wearing their new Wage War gear, pushed to the stage ready for an incredible performance. One by one, members walked onto the stage—drummer Stephen Kluesener, guitarist/vocalist Cody Quistad, guitarist Seth Blake, bassist Chris Gaylord, and vocalist Briton Bond, smiling from the love each fan in the room poured out for them.

They opened the set with “Relapse,”a song of vividly intense lyricism about the struggles of relapsing off of their 2021 album Manic. Following this was a mixture of songs from Manic (“High Horse,” “Manic,” “Death Roll”), Pressure (“Low” “Who I Am,”), and Wage War’s most beloved album Deadweight (“Witness,” “Alive,” “The River”). Bond expressed how impressed he was with the crowds overall participation, especially how well each person in the venue sang along to every song with every ounce of energy they had to give.

Wage War’s powerful performance encapsulated the venue, allowing the band and their fans to become one. This was an incredibly special bond created through movement and descriptive lyricism. Wage War closed its set with slower paced 2021 single “Circle the Drain (Stripped).”As soon as the song ended, Briton decided to roll right into their encore featuring “Stitch,” a song that brought the music industry’s attention to this phenomenal band. This was a remarkable way to end an overall extraordinary evening.