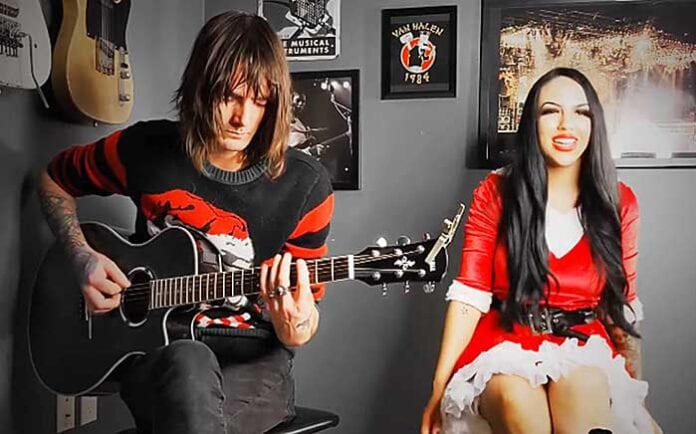 On Saturday night (December 12), Living Dead Girl put on a no-frills Christmas acoustic performance with proceeds benefiting the Lakefield Animal Welfare Society in Peterborough, Ontario. Consisting of one half of Living Dead Girl—vocalist Rennick and guitarist John Ellis—playing a couple of acoustic versions of songs from the band’s upcoming album, including first single “Alive,” as well as classic Christmas songs and a preview of an upcoming song.

The event took place at Rennick’s music studio in her house, where she also films all of her YouTube covers videos, giving the show a very intimate and personal vibe. Molly and Jon played an 18-plus minute set consisting of five tracks, including a stripped-down version of “Alive” to open the set. The acoustics in the small studio were booming, as Molly’s powerful, unfiltered scream cut through Jon’s bluesy acoustic guitar riffs. The 1940s classic Christmas hit “Baby It’s Cold Outside” and a cover of Mariah Carey’s “All I Want for Christmas Is You” were also performed, while a sneak peek of an unreleased Living Dead Girl track was teased at end of the show as the credits rolled.

This is a good opportunity to donate to one of Molly’s most important charities, as well as a chance to snag some exclusive Living Dead Girl merchandise. The Virtual Christmas show is available to rewatch 48 hours after its initial airing.