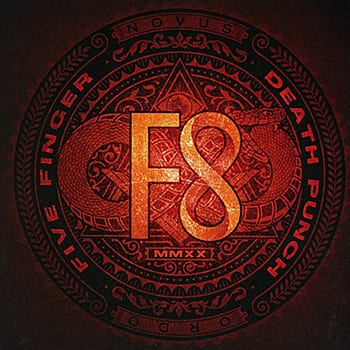 POWERFUL POP METAL: After a somewhat lackluster release in 2018’s And Justice for None (aside from perhaps the pair of covers), Five Finger Death Punch has returned to form on F8, their appropriately titled eighth studio album, first release for new label home Better Noise Music, and first release since the departure of tenured drummer Jeremy Spencer.

The band comes out swinging for the fences with lead single “Inside Out,” one of the band’s best works in years, a powerful track about frontman Ivan Moody’s struggles with addiction and substance abuse. Moody sounds rejuvenated and even reborn, a feeling that finds its way onto fellow single “Full Circle.” Much of F8 is what you by now have come to expect from the pop metal kings—searing riff-fests fueled by fierce guitar work from the tandem of Zoltan Bathory and Jason Hook (“Living the Dream,” “Bottom of the Top,” “Mother May I (Tic Toc)”), offset by melodically charged metal ballads (“A Little Bit Off,” “Darkness Settles In,” “Brighter Side of Grey”). “This Is War” is as heavy and ferocious as Five Finger Death Punch has sounded in years, as Moody directs his vitriol at some poor unfortunate soul with hateful one agg-laden after another bar (“you’re a snitch, you’re a cheat, you’re a liar and a thief, you’re the weakest of the heard, and you’ll get what you deserve”). “Scar Tissue” continues Moody’s bile spewing, this time directing his contempt at a former love (“you ripped my heart out and you threw it away, torn away, threw away, ripped away, been pushing buttons since the day that we met, all the pain, it’s a shame, you’re insane…infectious, I bleed you out, so precious, you’re empty”). Even the album’s bonus content kicks ass. “Making Monsters” is a thumper that has the makings of a future single and “Death Punch Therapy” sounds like a B-side from 2011’s American Capitalist—the lyrical references to 2007’s Way of the Fist and standout “White Knuckles,” among others, are a nice added bonus.

You could accuse Five Finger Death Punch of resting on their laurels in the past and becoming a bit too paint-by-numbers, but not on F8. The band breathes new life into their sound and comes out as revitalized and invigorated in the process. Depending on where you fall when it comes to Five Finger Death Punch’s discography, F8 is the band’s best album in years, and to be honest, the argument could be made that this is the best album they have ever released. ~ Brian Campbell

HATEBREED: Weight of the False Self