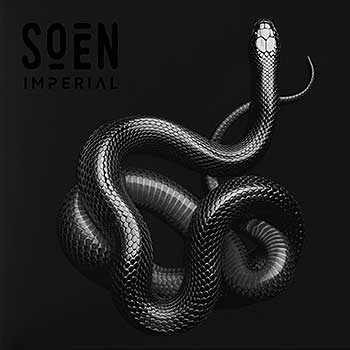 MODERN PROG ROCK: Swedish prog metal purveyors, Soen, have been carving out a unique niche within the metal subgenre since originally forming in 2004. On its fifth full-length album, Imperial, founding members Joel Ekelöf (vocals) and Martin Lopez (drums), along with Lars Enok Åhlund (keyboards and guitar), Oleksii “Zlatoyar” Kobel (bass), and Cody Ford (lead guitar), have created eight crisp and dynamic tunes. Often compared to Tool, Anubis Gate, and Opeth, the quintet has always thought way outside the box of what prog metal is supposed to sound like.

Album opener “Lumerian” begins with crunchy riffs, stuttered/truncated time signatures and heavy syncopation—including fast double kick drum patterns, followed by a wave of soothingly melodic passages and emotive vocal harmonies that envelopes the listener. From here on out, the entire record flows extremely well with a vibrant atmosphere. While “Illusion” and the Tool-esque “Modesty” slow things down slightly, “Antagonist,” “Lumerian,” and “Dissident” amp up the aggression with surging riffs, stabbing guitar melodies, and meaty, syncopated tom patterns. Most notably, the latter track contains 70s prog elements, yet it stays within the current modern prog metal model.

Although there’s not many direct or anthemic choruses (“Antagonist” is rather catchy), the band prefers to let the vocal melodies and soaring harmonies create the musical earworms, and vocalist Joel Ekelöf is the bright shining star of Imperial. His vocals are amazing, while Lopez’s intricate drum style guides the tracks with his groove-laden swinging patterns and guitarist Cody Ford has plenty of room to breath with some emotive and breathtaking solos, most notably on “Modesty” and “Antagonist.” Album closer “Fortune”—the longest track on the record at five-plus minutes—is a beautiful composition and is probably the most fluid and epic in scope, ending the album in dramatic fashion. The guitar tone and the production are top-notch throughout the record’s entire timeframe. Imperial was produced by Iñaki Marconi and the band, while mixing and mastering was handled by Kane Churko (Ozzy Osbourne, Bob Dylan).

Imperial isn’t as proggy as Soen’s previous releases, but the music is more straightforward and accessible. The record will have no problem fitting in with their previous records, yet this is the tightest and most cohesive Soen has sounded to date. Imperial is pure magic! ~ Kelley Simms