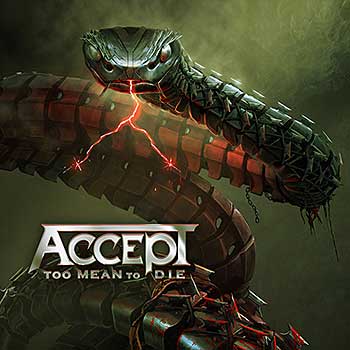 ACCEPT
Too Mean To Die

CLASSIC HEAVY METAL: Teutonic heavy metal titans, Accept, have achieved a long and illustrious career. From its 1976 formation with iconic frontman Udo Dirkschneider, to the not so prolific 1990s—including several hiatuses—to the introduction of another new singer in former TT Quick frontman Mark Tornillo and the band’s newfound success with 2010’s Blood of the Nations, Accept has seen it all.

Opener “Zombie Apocalypse” has classic Accept written all over it, decorated with its trademark razor-like guitar riffs, a fiery, mid-paced Teutonic gallop, surging melodies, and a powerful, anthemic chorus. The five-plus minute runtime flies by furiously, while the title track’s energetic, mid-paced rhythm strikes with ferocity. More classic Accept-isms follow with the highly memorable and catchy “Overnight Sensation,” the chantable chorus of “Sucks To Be You” and the classical-laden “Symphony of Pain.” In addition, the brooding “The Undertaker,” the powerful ballad “The Best Is Yet To Come,” and the AC/DC-esque boogie-woogie swagger of “Not My Problem,” further strengthens the vitality of this record. Album closer “Samson and Delilah,” which is an adaptation of an existing famous classical composition, ends the record in an epic fashion. Overall, there’s not a bad song in the bunch, making Too Mean To Die one of Accept’s strongest albums to date.

With the exception of a few underachieving records in the 90s, Accept has been going strong for four-plus decades. Although most Accept fans understandably miss Dirkschneider in the vocal position, Too Mean To Die marks Tornillo’s fifth album with the band. And they keep getting better. ~ Kelley Simms