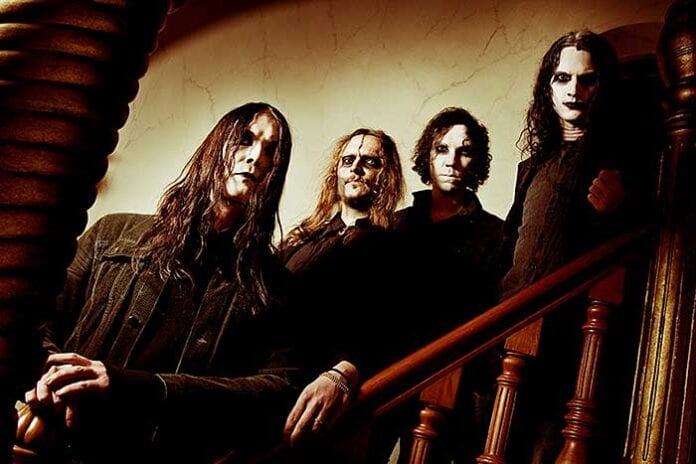 Nothing, not even a pandemic, can prevent Tribulation from releasing the band’s new album, Where the Gloom Becomes Sound. The Swedish Grammy winners also have a tour and festival dates booked for later this year. As with many Tribulation albums, Where the Gloom Becomes Sound embodies a creepy and dreary sound, and recently longtime member Jonathan Hulten departed the band and was replaced by guitarist Joseph Tholl. With all of this happening, it should be a big year for Tribulation. Guitarist Adam Zaars discusses adding Tholl to the lineup, the band’s songwriting, and performing after so much time off.

You recently added Joseph Tholl to your lineup. Are you looking forward to working with him? What should the fans expect?
Yes, very much so! I’m not quite sure what the outcome will be, of course, but in a way, this has lit a new spark of enthusiasm within the band and I’m personally curious about where it might take us. It’s not that we’re happy that Jonathan is gone, but we are at the same time very happy to have Joesph with us. What we do know is that Joseph is a very talented songwriter and musician, and we’ve all been inspired by what he has created in the past. Since we’ve known him for so long and since he has known Tribulation, both the band and the music, for so long, he already has a good idea of what we’re all about.

Jonathan Hulten was a major force behind the band’s songwriting. Do you expect a change in Tribulation’s sound for future material?
I’m sure it’s going to change somewhat, it’s bound to, but the overall Tribulation universe is still there and we are still going to work within its frames, so everyone should still be expecting Tribulation to be Tribulation, even with Joseph in the band. The biggest difference will be seen on stage rather than in the music, since Joseph obviously isn’t going to mimic Jonathan but find his own way. Who knows? The music might take us to new places, as well.

“WE’VE BEEN DRAWN TO WRITING ABOUT MYTH, MAGIC, AND RELIGION BECAUSE IT’S EASIER TO EXPRESS WHAT WE WANT TO EXPRESS THAT WAY.”

The band immersed itself in myth and magic for Where the Gloom Becomes Sound. Why do these concepts inspire you?
They’ve always been a big part of the band, and the easy answer would be that it’s something that is just interesting and inspiring. But I also think that we’ve been drawn to writing about myth, magic, and religion because it’s easier to express what we want to express that way. What we are trying to express, and what we’ve always been trying to express, is summed up in the title of our new album. This is something quite vague, quite ethereal, and difficult to grasp since it’s really a certain atmosphere and feeling that we’re seeking, and we find that it’s easier to convey that feeling in words that are more connected to something otherworldly rather than something of a more mundane character.

Tribulation has been inspired by bands outside of the metal genre. Do you think this has anything to do with your unique sound?
I’m sure it has to some extent. Metal is the foundation we stand quite firmly on, but for us it has been necessary to go to other places as well. What is probably the most noticeable would be the inspiration we’ve had from Swedish folk music with its often very melancholic and peculiar melodies. But inspiration can really come from anywhere—from the forest, from a painting, from a building, from hanging out with someone.

“METAL IS THE FOUNDATION WE STAND QUITE FIRMLY ON”

Tribulation also sets a certain mood with its music, something that many bands are unable to do. How do you achieve this?
It could have something to do with what I said previously, both that we are trying to express something from inside of us that we now termed “gloom”—but it could also be darkness, yearning, devotion etc.—as a key idea to the band, something that then, of course, gets mixed in with a good dose of heavy metal and whatnot, as well as that we draw inspiration from a lot of different sources. Some of that is directly inspired from more atmospheric sounding bands. The most obvious one is probably Popol Vuh.

Can you explain the concept behind your recently released videos for the singles “Leviathans” and “Hour of the Wolf?”
For “Leviathans,” we worked with a very talented guy called Ulf Lundén. The initial idea was that he was going to make something out of the cover and the illustrations in the booklet, but as his work progressed I really found the things he was making on his own fit better than the things I had sent him, and the two ideas didn’t quite match. We wanted a very watery feel to it, obviously, and I think he did a great job. “Hour of the Wolf” is a ghastly song, so we wanted a ghastly video for it. We went out to a castle by Lake Mälaren and shot it all with our old friend Gustav Öhman Spjuth, who also did the video to “Strange Gateways Beckon.” It was freezing as you can see on Johannes’ breath. We managed to get a hold of some great costumes for him, and that was that.

“WE’VE ALWAYS WANTED TO REMAIN TRUE TO OURSELVES AND WE’VE NEVER WANTED TO MAKE AN ALBUM THAT DOESN’T FEEL HONEST.”

Tribulation’s sound has evolved throughout the years. Why is it important to grow and change as a band?
The music changes as we change. We’ve always wanted to remain true to ourselves and we’ve never wanted to make an album that doesn’t feel honest. We’ve never been able to look back and say that we want to recreate something that we’ve already made. It would feel like playing in some kind of cover band or something. There seems to be a lot of room in the creative space that we’ve created and the inspiration is usually the same, but the outcome is different according to where we are in life and who we are as persons. The same raw ingredients cooked to different dishes, pretty much.

You have an upcoming tour and festivals booked. How will it feel to be on stage again after more than a year off?
It’s probably going to be a bit strange before the first show, and at the moment, it still feels quite distant, but once we’re back I’m sure it’s going to be like getting on a bike after you haven’t done that for a while. In a way it’s been great for us as a band to be able to get this involuntary break. I think we needed it, but it can’t be like this forever.

What’s your outlook on touring, festivals, and shows in general, for 2021 and beyond?
At the moment we just have to wait and see. We’re hoping we’ll be able to play again as soon as possible since we want to be able to do a few tours with this album. I’m guessing we’ll also be focusing on writing new music with Joseph in the band. We’ll possibly do some kind of livestream as well.