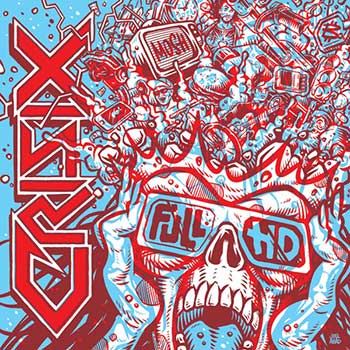 PIZZA STAINED CROSSOVER THRASH: The pandemic period has been a busy one for these Barcelona thrashers. And following the take no prisoners frothy whip up of all-around creativity of The Pizza EP—a release that raised the bar in the areas of design, packaging, musical energy, short film/promo videos, and culinary association—was going to be a tall order, especially without the luxury of being able to pin listener’s ears to the wall for four songs then get the hell out before overstaying their welcome.

Full HD is the band’s fifth (or sixth, depending on how you look at things) album, and where The Pizza EP was a lighthearted, roller coaster fun ride, its 11 songs are more continuation of the thrash the quintet chose to pay homage to on 2019’s Sessions #1 — American Thrash covers collection. They definitely have tapped into the darkened brutality of bands like Vio-lence, Evildead, and Demolition Hammer (“Speak Your Truth,” “Beast”), the rollicking bouncy crunch of Exodus, Anthrax, and Nuclear Assault (“John Was Born for Metal”) before shining a light on Forbidden and Testament’s technical finesse (“Extreme Fire Hazard,” “Boc de Biterna”). And those are just the bands whose influence has been extrapolated from that recording into this particular work.

There are plenty of other old school faves that have been twisted and rearranged here. For instance, whether the band realizes it or not, the title track asks the question, “Can you do the ‘Milano Mosh’ while lugging Martha Splatterhead around on your shoulders?” Other moments like “The Many Licht Paths” see them reaching, maybe a bit too far, for epic grandiosity with a Pantera groove part that doesn’t do many favors, except maybe for drummer Javi Carrión and his “CFH” neck tattoo.

A good chunk of the album’s second half is competent, but sometimes unexciting, that takes the occasional risk, but ultimately has the high-octane energy peter out in favor of obligatory half step mosh parts. One stumbling block facing Crisix on Full HD is that the short film they made of The Pizza EP, as well as the two videos already filmed for tracks from this album (not to mention their raucous, carnival-like live performances) have resulted in establishing them as a visceral entity. Like it or not, they’re the sort of band that is much more entertaining to experience either in the flesh or mugging for the camera while performing on a soundstage as part of a three minute storyline. As dynamic as the music is, you’re left wanting more and left wanting a visual and cinematic addendum to the speedy tempos, curt riffing, gang vocals, and frontman Julián Baz lobbing virtual spittle at your ears. ~ Kevin Stewart-Panko