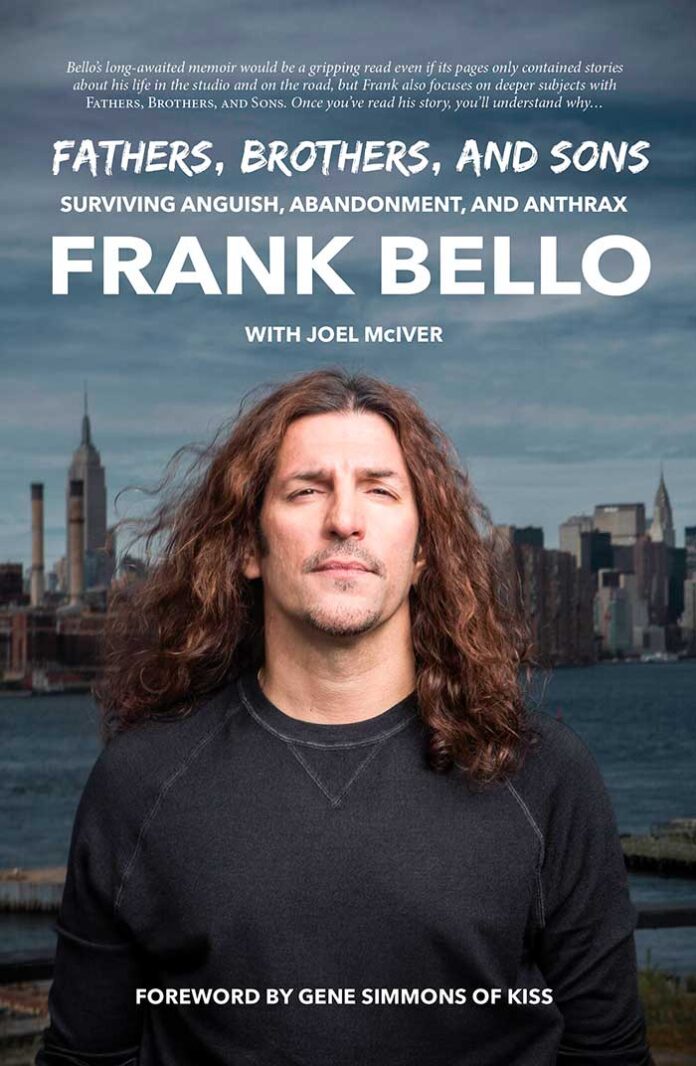 MORE THAN YOUR AVERAGE MEMOIR: Frank Bello’s autobiography is much more than your average tell-all. If anything, it feels like a confessional. Fathers, Brothers, and Sons: Surviving Anguish, Abandonment, and Anthrax possesses a unique intimacy and speaks largely to Bello’s easygoing and approachable style.

The book was co-written with long established heavy metal author Joel McIver and touches upon a lot of Bello’s musical history, not only with Anthrax, but also of his brief time with noise rockers Helmet. It also delves deeply into Frank’s other passions—food and acting, to name a couple—while also serving as a heartfelt revelation into some real-life familial drama and tragedy.

Fathers, Brothers, and Sons discusses notions of masculinity and how they can cohabitate with the growing empathy and understanding that comes with both age and fatherhood. It feels like Frank is trying to find his way with us, the reader, and this lay it bare honestly makes it easy to get sucked into the writing right from the jump. Of course, it helps that this is not written with any sort of high-minded or flowery prose. This is real talk from a real person, going through some real shit.

Gene Simmons of KISS wrote the foreward for Bello’s book, and although The Demon does predictably turn the narrative onto himself, he ties things together in such a way that really makes sense if you know Simmons’ personal history. He also has some very nice things to say about Bello’s legacy within the heavy metal world, bringing it all back to Frank’s well documented love of all things KISS.

There’s some cool insight into Anthrax’s creative process as a band and some cool stories from the road, including Bello’s recollections about opening for Tony Iommi and Black Sabbath during the disastrous Seventh Star tour. Additionally, there’s some great tech talk from a bassist’s perspective, as well as memories of the iconic Big Four concert from Yankee Stadium in New York City.

We could’ve used even more musical talk from the road and historical tour stories, but this memoir wants to be something different. It’s part therapy, part true crime, and part rock ‘n’ roll life story. It’s a celebration of life, of strong women, and of family. It’s also one of the best metal memoirs out there and highly, highly recommended. ~ George Pacheco