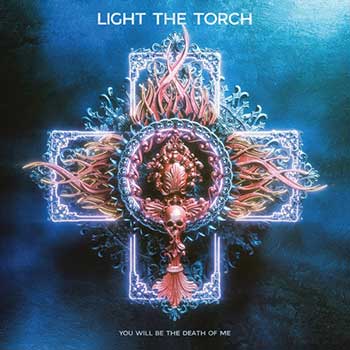 LIGHT THE TORCH
You Will Be the Death of Me

MODERN MELODIC METAL: Formed in 2017, the Los Angeles trio, Light the Torch (formerly known as Devil You Know), has grown stronger with each passing year. On its sophomore effort, You Will Be the Death of Me, the band has honed in on its trademark sound that they first locked in on its 2018 heavy contender of a debut album Revival. Featuring vocalist Howard Jones (ex-Killswitch Engage), guitarist Francesco Artusato, and bassist Ryan Wombacher, the band has become a formidable musical unit. Plus, snagging powerhouse drummer Alex Rudinger (Whitechapel) gives the band that extra punch it needed.

On You Will Be the Death of Me’s 12 short, hooky anthems—with only one track exceeding the four minute mark—you just can’t go wrong. Opener, “More Than Dreaming,” is an explosive beginning to the record, decorated with a slamming rhythm section, massive groove, huge melodies, and those distinctive, soaring vocals from Jones. More of the same follows this track with the heavy and melodic “Let Me Fall Apart,” complete with choir vocals, along with the more aggressive modern metal anthem “End of the World” and the almost poppy “Wilting in the Light,” which contains a slight spaghetti western vibe. Pulsating synth patterns drive most of the tracks, including the title track, “Become the Martyr,” and standout “Living with a Ghost,” which happens to be the heaviest track on the record.

The unexpected album closer, “Sign Your Name,” which is a cover of the 1987 Terence Trent D’Arby classic, appears to be an odd choice at first. However, the song’s poppy demeanor and Jones’s heartfelt vocals end the record in the most charming of ways. Although the songwriting is a bit predictable throughout You Will Be the Death of Me, Light the Torch’s second release is a great effort, full of engaging, emotive, and passionate modern metal/active rock tracks. ~ Kelley Simms