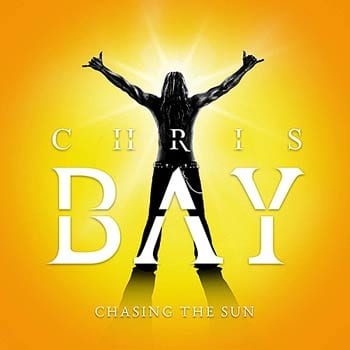 HARD AOR: Chris Bay is best known as the mastermind behind melodic metal heroes, Freedom Call. Despite 20 years leading the Teutonic major key maestros, the guitarist/vocalist hasn’t limited his writing to metal, and the result is this, his debut solo work. Those familiar with Freedom Call will undoubtedly hear Bay’s style and preferences, especially in opener “Flying Hearts,” but here the angelic vocals, I-V-vi-IV progressions, AOR phrasing, and spacious guitar work are filtered through 80s and 90s superstars like Crowded House, Ultravox, Bryan Adams, Simple Minds, and INXS. Songs like “Misty Rain,” “Light My Fire,” and “Hollywood Dancer” are portals back to when MTV ruled the airwaves and actually played videos. As a band, Freedom Call isn’t what anyone turns to when pumping up for a few rounds in the octagon or a night on the town sucker punching cops, and Bay shines even more sunshine on that fact—just look at the album cover. “Where Waters Flow in Heaven” and “Love Will Never Die” are both like “November Rain” drowning in high fructose corn syrup, and “Bad Boyz” imagines the Sunset Strip through the eyes of 90s Seattle (the “z” in the song title is the edgiest part of the album). As a rule, Bay’s prolific methodology takes simplistic chord progressions and layers chest thumping, life affirming peals of positivity, and Chasing the Sun is no different. It’s just coming from a different angle. ~ Kevin Stewart-Panko