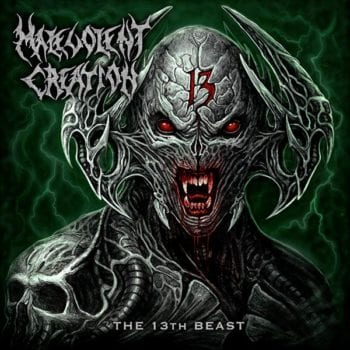 DEATH METAL: Formed in 1987, Floridian death metal band Malevolent Creation never fully reached the upper echelon of the genre that their peers in Death, Obituary, Cannibal Corpse, and Deicide achieved over the years. However, Malevolent Creation has been churning out serviceable death metal for three-plus decades now. With its 13th full-length release, The 13th Beast, the band has a lot to live up to. With the untimely passing of revered vocalist Brett Hoffmann last year, new recruit Lee Wollenschlager has some big shoes to fill. His register is somewhat similar to Hoffmann’s later era output, yet with a deeper, monotone growl. The whole band is brand new with the exception of original guitarist Phil Fasciana. On its 11 tracks, the band’s songwriting never even comes close to its 1991 groundbreaking debut, The Ten Commandments, or its stellar 1992 follow-up, Retribution. The overall quality of each song is just average by Malevolent Creation standards. There are some brief, interesting melodies here and there with familiar tremolo picked riffs, which was truly the basis of the band’s early sound. “Canvas of Flesh” is a brutal affair, while “Agony for the Chosen” is equally engaging with a memorable chorus. “Born of Pain” crushes relentlessly for almost seven minutes, while album closer “Release the Soul” has the most diversity, and therefore, the most staying power out of all the tracks. With its slow building tempo, ominous guitar melodies, Slayer-esque transitional riffs, and a great anguished growl, it finishes the album with a lasting impression. However, there’s nothing too extraordinary or very memorable about The 13th Beast, with little to no replay factor. It’s admirable that Fasciana has tried to keep Malevolent Creation relevant after all these years, but unfortunately, the band is just a mere shell of its old self. ~ Kelley Simms