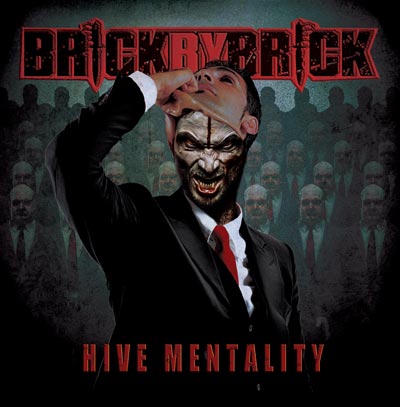 MODERN HARDCORE: New York brawlers Brick by Brick returns with its sixth studio album, Hive Mentality. Unapologetically predictable, its nine tracks are wonderfully angry, defiant, and aggressive. The entire record is loaded with tons of pit slamming riffs, brutal breakdowns, and anthemic choruses laced with acerbic vocals. Several guests have been enlisted to add to the brutality of the band’s original material. On album opener and the title track, scathing rap-rant diatribe from Netflix’s original series Orange Is the New Blackactress Jessica Pimentel kicks the album off in fine fashion. More guest appearances continue with “Bars Open”—the pinnacle of the entire album and a true representation of the band’s party ethos—features crossover stalwart Municipal Waste/Iron Reagan vocalist Tony Foresta. The juxtaposed vocals of Foresta and Brick by Brick vocalist Ray Mazzola on the chant-able chorus is savagely fitting, while “In the Ruin” features a brutal duet between Mazzola and Vincent Bennett of The Acacia Strain, which is a revamped song that was featured as a limited edition run. Closing out the album are two cover tunes: “Slave to the Grind” by Skid Row and “Iron Fist” by Motörhead. While the former is an interesting choice, it’s not overly impressive, but the latter absolutely slays. Brick by Brick has been earning respect within the modern hardcore scene for 15 years now. Although they aren’t trying to reinvent the wheel here, they deliver dependable thrashy hardcore that makes you want to break some shit. ~ Kelley Simms