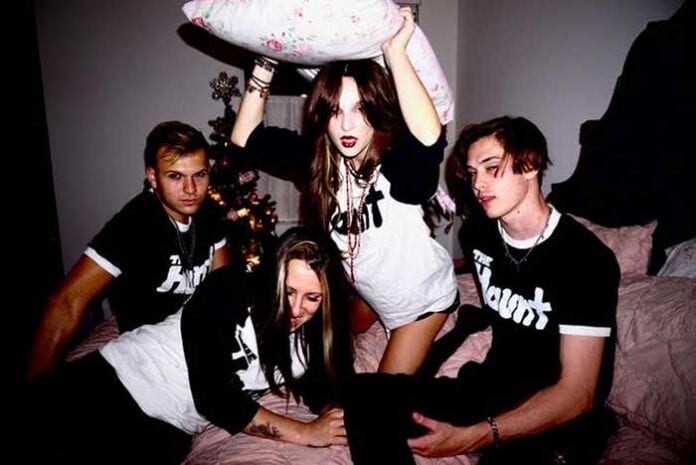 CHECK OUT OUR INTERVIEW WITH THE HAUNT IN OUTBURN #93—ON SALE NOW!

Here to save Hollywood is the powerhouse collab of the year, a vision quest and an anthem to liberate us.

Plan A ended up being a bunch of hot air and blowhard posturing. The world wants something fresh so The Haunt met the test. Say hello to the frisky riot grrrl fury of “Hollywood,” a fun punk rock shuffle written exclusively for Plan B, the whip-smart new comedy from Natalie Morales, the acclaimed actress known for her roles on Parks and Recreation, The Grinder and Dead to Me.

The teen comedy follows Sunny, a straight-laced high school student (Verma), and her slacker best friend, Lupe (Moroles), who have 24 hours to hunt down a Plan B pill in America’s heartland. In the official trailer, Victoria is seen wearing a Haunt jersey. For the artwork for the single, the band don the same shirt.

A longtime fan of the S. Florida alt-pop rockers, which includes Anastasia Haunt (lead singer), Maxamillion Haunt (guitarist, singer, and producer), Nick Lewert (drummer and producer), and Nat Smallish (bassist), Morales asked the band to write a song for the film. The band were actually in Hollywood at the time, recording their debut album, so it seemed serendipitous and, ultimately, prophetic.

Max recalls, “Hollywood pretty much speaks for itself. Recorded in an Airbnb in Los Angeles at 5’o’clock in the mornin, it kind of took its own form of late night, no sleep extreme deadline, punk chaos right from the start. But when your friend calls and says she needs a punk song for her upcoming, Hulu original film and the deadline is tomorrow, you stay up all night and make the fucking song. So that’s what we did.” Adds Morales, “Having been a long time fan (and friend) of The Haunt I am so happy we got to include their music in my movie, Plan B.” The film also features the song “Brat,” from The Haunt’s self-tiled EP.

“Hollywood” arrives on the heels of the band’s critically-acclaimed sophomore EP, Social Intercourse, which featured “Love You Better,” “Wish You Stayed” and “Brag About.” Tastemaker, Alt Press, highlighted the band in its recent ‘100 ARTISTS YOU NEED KNOW’ with additional support from idobi Radio, Outburn, Wonderland, American Songwriter and Spotify on their ‘Fierce Femmes,’ ‘All New Rock, and ‘New Noise’ playlists.

The new nü is in clear view. Forget popping a pill, have a concentrated dose of “Hollywood.” Play it loud, wear it proud, the boys of summer are nowhere to be found.