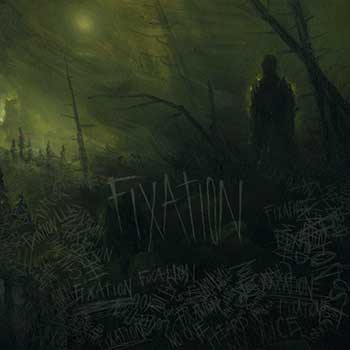 THE EMBER, THE ASH
Fixation

BLACKENED METAL: If there ever were an intersection between black metal and old school metalcore, then The Ember, The Ash, a solo effort from someone who goes only by the name 鬼, would take up residence there. Their sophomore release, Fixation, finds a band in transition, one still searching for their sound. But make no mistake, this record is well written and even better executed, if not slightly uneven at times.

Not only is opening track “Strychnine” a fucking monstrous track, full of grooves so heavy they leap off the record, 鬼 immediately proves a worthy vocalist, one capable of working in the metalcore milieu, delivering flat out shattering bars and shredding refrains. “Fixation,” a track that deserves a place on all heavy music fan playlists, follows suit, introducing destructive riffs into the mix. Genre lines begin to blur on “Becoming the Eldolon,” as touches of symphonic black metal begin to weave their way into these crushing bars. Fixation mutates and takes on new life on album standout “The Colossal Void,” which finds The Ember, The Ash play the role of Emperor Palpatine and embrace the darkness, a track that lends itself more to Dimmu Borgir and Behemoth than Shai Hulud or Norma Jean. That darkness continues to pulse its way through the veins of the latter half of Fixation (“Celestial Fracture,” “A Growing Emptiness”), with the transformation becoming complete on “Consciousness Torn from the Void,” a nearly 10 minute closing opus.

While the metalcore portion that began Fixation is enjoyable,this is an album that gained steam and got stronger as it wore on. And if how The Ember, The Ash ended things on Fixation is any indication of what the future holds, their most impressive work is still yet to come. ~ Brian Campbell