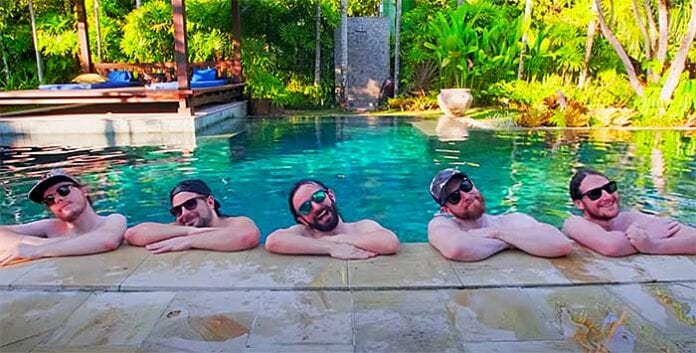 The notorious Pirate Kings ALESTORM release their long-awaited long-player Curse Of The Crystal Coconut today via Napalm Records! In addition, they present their latest single, “Pirate Metal Drinking Crew” – an homage to pirate life and… probably themselves! Rhythmic guitars, slapping drums and Captain Bowes’ rum-laden vocals weave throughout the song and will have it stuck in your head with the first listen – that’s a promise.

The song is accompanied by an audiovisual, taking you on a trip to Thailand – more specifically, to the studio where the “Pirate Metal Drinking Crew” recorded Curse Of The Crystal Coconut. It also features the legendary rubber duck (in a very different way than you might expect), the smashing of a perfectly innocent ukulele and purely crazy pirate madness. See for yourself!

The “Pirate Metal Drinking Crew” is back to show all the filthy landlubbers what they’re made of. ALESTORM’s sixth long-player, Curse of the Crystal Coconut, features eleven tracks presented in ALESTORM’s signature unadulterated, chaotic fashion. Adding to that are guest performances from musical greats like Ally Storch of SUBWAY TO SALLY (violin on the entire album) and Captain Yarrface of RUMAHOY!