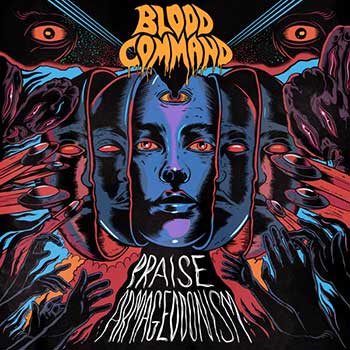 DEATHPOP: For the past 17 years, Blood Command has been redefining what it means to blend an aggressive style, multi-genre rock, and pop so seamlessly into the same genres, and very rarely do they ever get the credit they deserve. While the scene is more focused on its pop punk, post-hardcore, and traditional punk counterparts, Blood Command has always wanted to stand out from the crowd, molding all these genres together and creating what they call deathpop.

Forging this new path forward with their music style in hand, 2010’s Ghostclock put the band on the map, building up momentum to their 2012 iconic release Funeral Beach. Five years would pass, and they would then release their 2017 album Cult Drugs. A lot has changed within the growth of these three albums, as well as the changing of front vocalists throughout the years. While many bands would have just thrown in the towel, Blood Command’s commitment and unrelenting resolve to doing what they love are proven tenfold with their new release, Praise Armageddonism. Rerecordedwith new ex-Pagan’s vocalist Nikki Brumen, they have never sounded better. While it took over three years to complete, their efforts have shown that while obstacles can get in the way, you can still fiercely come out on top.

“Saturday City” envelopes us more into the infectious energy of the album, as it takes us on an explosive roller coaster ride of synths, unrelenting fury of drums, and catchy guitar melodies. “The End Is Her” continues the groovy yet brutal energy of the album, with Brumen’s vocals keeping up the intensity with each track. “Everything You Love Will Burn” brings a very short but pop heavy Dance Gavin Dance feeling to the album, which leads us to the gritty but gratifying track, “A Questionable Taste in Friends.” A unique listening experience on the album with addictive rhythmic guitar riffs, it’s sure to be an album pleaser.

Praise Armageddonism begins to have its teeth with moments like “I Just Want That Movie Ending,” which qualifies as one of the best tracks on the record, and “Burn the Blasphamer.” Bursting with colossal guitar hooks, frenzied percussive atmosphere, and some of the best use of Brumen’s vocals, it doesn’t prepare us for the femme fatale of the album, “Last Call for Heaven’s Gate.” Combining all the efforts we have heard up to this point, “Last Call for Heaven’s Gate” dazzles with multi-genre genius, luminous soundscapes, raw vocal beatitude, and gorgeous sax solo.

Praise Armageddonism is a work of art that shows Blood Command’s maturation as a band and overall progression as musicians. Nikki Brumen makes a wonderful addition to the band and fits like a glove into their style. Neon fury on top of mastery of beautiful melodicism permeates this record from beginning to end. If Blood Command keeps making A+ hits like this, the future looks bright for this Norway deathpop band. ~ Sammie Star