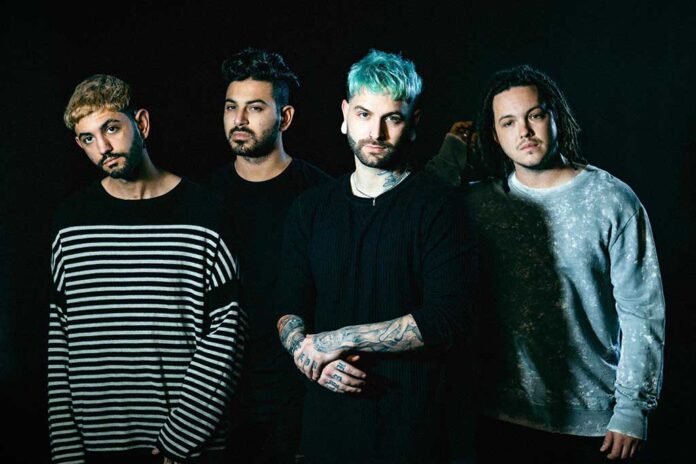 A lot rides on a band that wants to be more than a talented cover band on YouTube. So when it came to Fame on Fire making Levels, a lot depended on this release, not just making it in the scene but proving to the music industry that they were a serious act behind their successful covers. While Levels paid off in dividends and a well deserved spotlight within the scene, the experience of gearing up toward that album was not easy, for wanting to cement yourself in an arena of established and hungry bands is very difficult.

“GOING INTO THE SECOND RELEASE, WELCOME TO THE CHAOS, WE BELONG TO THE ROCK COMMUNITY”

“We were just starting out in the industry with Levels,” vocalist Bryan Kuznitz points out. “We were just doing covers before. When you are just doing covers, you are not really in the industry so much. When you are signed to a record label and you start working on your first album, you’re still not really in it until you release that album. The tastemakers will then say, ‘Okay, sounds legit,’ or, ‘Wow, this band still sucks.’ I feel like once we released Levels and we went into some pretty legitimate tours pre-COVID, we felt that we belonged in this industry. We were a part of the rock community, when before we didn’t feel like we were a part of any community. It just felt like we belonged to the YouTube, TikTok, online sector of things. Levels was something all original and produced by us. Going into the second release, Welcome to the Chaos, we belong to the rock community, are playing the festivals, going on the tours, and meeting all these bands. It all feels real now. I feel now like we have made it.”

Levels showed the Florida rock band was an instrumental jack of all trades, and their new release Welcome to the Chaos was fine-tuning what the band had already worked tirelessly at self-producing. But while Levels was the vantage point that showed the band could do more than cover songs, more work still had to be done to cement their place and identity in the industry.

“When it came to Levels, we didn’t quite know what we were doing during this process,” Bryan candidly admits. “Our pencils were not as sharp as they are now. When it came to Welcome to the Chaos, we had a clear vision of what we wanted to do and how we wanted to sound. When we were writing Levels, the vision wasn’t that clear. With this release, things were more navigated in terms of sound. This record also took longer to write. We had over 200 demos. We were picky on what was going to go on this record. A lot of the best songs came from us working together collaboratively in the same room. We took the approach of catering to the song, not to our egos or anything else, just the song. It doesn’t matter who writes what melody. As long as whatever we write caters to the song, we roll with it.”

Working with metalcore luminaries in the industry, such as Spencer Charnas (Ice Nine Kills), was an enriching experience for the band in creating the title track “Welcome to the Chaos,” as it not only contributes to the opening of the album but is also one of the most immersive experiences on the record.

“We started working on the title track ‘Welcome to the Chaos.’ We realized the song was so theatrical—the melodies, the instrumentation. The lyrical content matched the theatrical vibes as well. We were hanging out and thought to ourselves, ‘How cool would it be to get Spencer Charnas on the opening track of this record?’ The label also thought this was a great idea. We went on tour, and keep in mind, while this was happening, Ice Nine Kills was pushing out their record. There was a lot of craziness going on. Luckily, he enjoyed the song and was down to put aside some time and get it done with us. The song came out perfect, with one of the best people to be on this song in the modern era.”

Outside of the bombastic opener that comes with Welcome to the Chaos, it holds nothing back when it comes to taking atmospheric, instrumental, and lyrically vulnerable risks. Songs such as “Cut Throat,” “Signs,” “Plastic Heart,” “Jaded,” and “Dead or Alive” are undisguised gut punchers that dove in deep this time around to show another side to Fame on Fire.

“ALL THE LYRICS ON THIS ALBUM PERTAIN TO MY EXPERIENCES. IT’S ME BEING VULNERABLE”

“Before on Levels, everyone was writing the lyrics, and so the lyrics were a bit scattered,” Bryan replies. “It didn’t mean as much writing that way. So this time around, I wrote all the lyrics. We can revise them, making sure the flow is correct, but the lyrics have to come from one source. This process meant a lot to me. I needed to be able to portray true emotion. All the lyrics on this album pertain to my experiences. It’s me being vulnerable. For me, lyrically, being vulnerable is the best thing you can be. It helps people out. Growing up, listening to other artists, I identified with that. I feel fans can take something away from that. I want people to enjoy this record. You’re not alone in this world. Everyone has their own chaos. We are no different from them. The silver lining is we made it out of the chaos. I just hope they can find some solace in that.”

TOXIC HOLOCAUST: Back to the Future