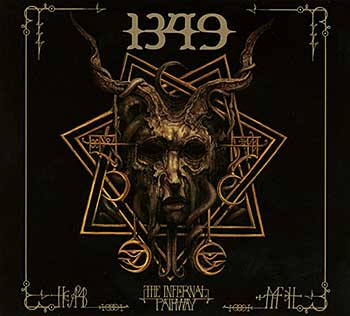 BLACK METAL: There was a time, not so long ago, when anyamount of innovation within a traditional black metal framework would be condemned as pure heresy among its faithful. Ironically, this view stands in dull opposition to the very concepts of art and self-expression, both of which are intrinsic to all great music. And while an increasingly marginal set of self-styled purists will ever insist that black metal remain impervious to evolution, bands like Norway’s 1349 have not only withstood such attitudes but they have thrived on conjuring an arresting vision of black metal that stays true to its frosty Norwegian roots while imbuing the sound with thoroughly modern production and subtle melodic experimentation.

This fall sees the release of The Infernal Pathway, 1349’s seventh full-length campaign and second consecutive outing with co-producer Jarrett Pritchard. While earlier albums, such as 2005’s Revelations of The Black Flame, saw the band expanding their vision with a fearless appetite for experimentation, The Infernal Pathway marks more of a stylistic continuation of 2013’s Massive Cauldron of Chaos—a supremely engaging effort that notched the band a hail of critical reviews as well as a Norwegian Grammy nomination.

This is not at all to say that The Infernal Pathway is simply Massive Cauldron, Pt. II. The most striking similarity between the two records is not the material, but the production. On their latest, Pritchard once again coaxes a modern and absolutely feral vitality from the tracks. The guitar tones crack with thick distortion and the drums erupt through the speakers with a deep and fearsome potency. Tracks like “Through Eyes of Stone” and “Enter Cold Void Dreaming” showcase the chaotic, old school style of storming tempos and rampaging, razor wire riffage that will delight even the most finicky of black metal disciples. These elements, along with Frost’s mountain splitting blastbeats and Ravn’s caustic roar, tap deeply into black metal’s golden age of the early 90s.

More interesting are tracks like opener “Abyssos Antithesis,” which begins with a series of crunchy trad metal power riffs before the hammer drops and a bludgeoning black metal strafing ensues. Also notable is the series of icy atmospheric soundscapes known as “Tunnel of Set, VIII – X” that serve as connecting tunnels between songs—a theme first introduced on 2011’s Demonoir. 1349’s thrashier side is on full display here, and “Through Eyes of Stone” establishes that while the band possesses a tremendous capacity for speed and aggression, these qualities never come at the expense of the quartet’s heroic musicianship.

Vocally, Ravn sounds as dark and provocative as ever, his throat shredding howl investing the tracks with enthralling urgency. That he sounds so relevant and so utterly vital seven albums into their career portends great things for 1349.

Saving the best for last, closer “Stand Tall in Fire” is an immersive eight minute black metal epic beginning with a spectral spoken word intro before gathering force into a tornado of swarming riffage, neck breaking tempos, and a positively dizzying guitar solo that all build to an explosive, sweat drenched climax.

Brutal as hell from stem to stern and bursting with buzz saw riffs and darkly compelling themes, The Infernal Pathway establishes that the black metal legends are still operating well within their prime. ~ Joe Daly