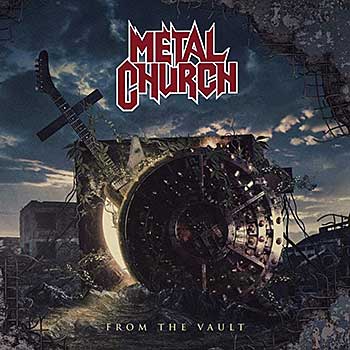 METAL CHURCH
From the Vault

The four new tracks are all absolute winners, with opener “Dead on the Vine” possessing trademark Metal Church elements with menacing yet melodic riffs, piercing melodies, and Howe’s high-pitched croon. “For No Reason” also continues the band’s trademark formula, decorated with sharp vocals, razor-like riffs, and a hooky as hell chorus. This remake of “Conductor,” originally appearing on 1993’s Hanging in the Balance, outdoes the original by a mile. Sound wise, it’s mixed better with a more explosive and powerful delivery. Plus, Howe’s vocals have never sounded better. “Above the Madness,” with its five plus minute runtime, contains a cool little twin lead guitar harmony section, but ultimately becomes a bit repetitive.

The B-side tracks from the Damned If You Do sessions are equally as impressive, with “Mind Thief” and “Tell Lie Vision” being standouts. While the cover tunes are unique and interesting, they certainly aren’t favorite choices. However, out of “Please Don’t Judas Me” (Nazareth), “Green Eyed Lady” (Sugarloaf), and “Black Betty” (Ram Jam), the latter is probably the best out of the three.

Lastly, the live tracks—“Agent Green” from 1991’s The Human Factor and “Anthem to the Estranged” from 1989’s Blessing in Disguise—recorded at Club Citta in Kawasaki, Japan, are performed, produced, and mixed so well that it’s hard to believe how clean, pristine, and crisp they actually sound. Howe’s vocals are perfectly pitched. And if you’ve ever seen Metal Church live, you already know how tight and precise they are. Plus, remixed bonus tracks “Killing Your Time” and “Needle & Suture” from 2016’s excellent XI album are equally entertaining.

If you’re a fan of the Mike Howe era of Metal Church, then this is a nice little treat of goodies from one of the most preeminent melodic thrash bands from the 80s that are still making kick ass records. ~ Kelley Simms