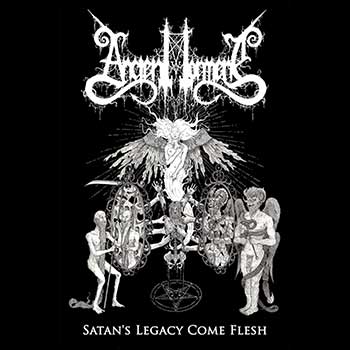 BLACK METAL: Rhode Island boasts a small but apparently fertile black metal scene, and Ancient Torment is the latest bastard progeny to crawl out of it. Rewriting no rule books, their take on the genre is of the raw and filthy kind, taking a keep it simple approach that relies on two guitars, bass, drums, and a tortured larynx to get their point across. The production is, of course, free of bells and whistles, too, and while the four tracks comprising their debut EP aren’t about to set the world on fire, they establish the band as a decent collective worth keeping an eye on.

Straight out of the gate they attack with the title track. Built initially on buzz saw guitars and blastbeats, they don’t remain locked into a single tempo the whole time, shifting into something that is more punky and with it more melancholic in tone and even getting a little jaunty to mix things up. This, however, is trumped by second track “Seven Black Keys (Of Damnation),” which is straight-up evil. Kicking off with a sinister riff, it only grows more threatening when the second guitar comes in, and it is drenched in darkness from start to finish, locking into a slow and loping groove for a time that is downright oppressive.

The shorter and more direct “Eve In Estrus” is the weakest track here, doing nothing to really stand out or demonstrate much in the way of character, but it paves the way for the nearly 10 minutes of “A Treasure Squandered” to finish things off strongly. Weaving its darkness and violence around something more poignant, it is a mostly compelling track, and the riff that repeats over and over again as they race to the finish line is a powerful one that sticks in the head long afterward. ~ Dan Slessor