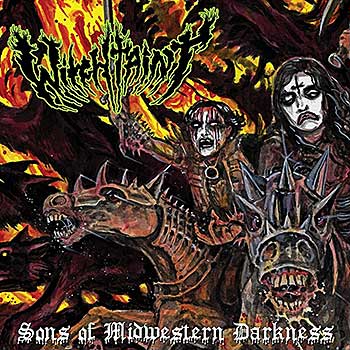 COMEDIC BLACK METAL: What started as some harmless juvenile prank emails to black metal record labels has become a full-fledged band. Witch Taint is the perfect parody metal band in the same vein as Steel Panther, Turbonegro, and Dethklok.

Donned in typical black metal attire including corpse paint and metal studded wristbands, Witch Taint is made up of guitarist and co-vocalist Lance the King of Black Metal (prolific comedian and musician Dave Hill) and vocalist Matthias Backwards (musician and comedian Phil Costello). By blending blazing riffs, over-the-top theatrics and humor, this “Satanic Norwegian black metal band from Indiana” sure knows how to craft catchy as hell metal tunes with a sense of humor.

On its debut full-length album, Sons of Midwestern Darkness, the duo combine humorous lyrics, vicious riffs, and catchy, anthemic choruses. On its 15 headbang-able tunes (including an intro/outro and several humorous interludes), the band injects multiple genres into its musical cauldron, including metal, rock, goth, pop, death metal, and black metal into one unique listening experience.

These tracks were originally just black metal jokes, but Witch Taint delivers the songs with an original approach and genuine passion for the genre. Opener “Introduction” does just that, by introducing the comedic material that sets the story for the rest of the tracks. In fact, all of the short interludes have a storytelling aspect where the topics of conversation set up the ensuing tracks. First proper track, “We Are Your New Gods,” is a glorious mixture of everything this band does well—ominous tremolo reverb picking, operatic female choir vocals, midpaced chugging riffs, a catchy chorus with melodic vocal harmonies, and a fiery guitar solo.

Of course, Witch Taint loves black metal, so the hooky “Death to Death Metal” makes total sense. And it’s catchy as hell, too. You’ll find yourself singing it, not even realizing how silly it is to be singing something such as it, even if you do love death metal. “Changes,” which chronicles those original emails Lance sent to this one particular record label, possesses a 70s rock ballad-esque meets a 90s pop tune with humorous lyrics about condo fees, mortgage, kids, and garbage removal sung with passion and emotion. The hooky earworm of a memorable chorus will be stuck in your head for days. The quality of songs don’t stop there, either. The catchy “Sons of Satan,” with a guest appearance by Satan himself, is a perfect combination of evil and humor, while “Ready for LVV’s” 70s techno/disco/soul vibe is so wrong…yet so right. The rest of the tracks are equally as impressive, including bonus tracks “Gods of the North” and “Hall of the Witch.”

Whether Witch Taint is your bag or not, you’ll have to admit that the album is very catchy. The band has put a lot into this album—humor-wise and music-wise. The lyrics are funny, while the music is heavy and sounds passionately authentic. Sons of Midwestern Darkness contains everything a devout metalhead would want, humor and all. ~ Kelley Simms