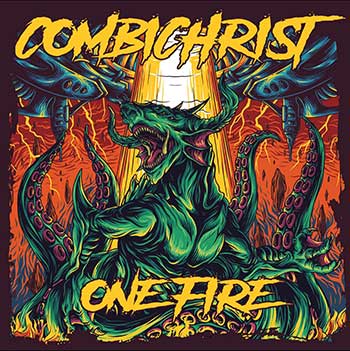 INDUSTRIAL METAL: “A beat-driven explosive journey through an aggressive industrial landscape” would likely be the most metaphorically poetic description of this release from industrial titans Combichrist. Having quickly risen to near cult-like status amongst fans of this subgenre of metal, One Fire validates the magnetism with catchy beats that hook into your mind and don’t ease up. Before even diving into the record, the album artwork deserves a pause for some appreciation. With striking and eye-catching colors, the artwork itself demands respect from the viewer. Illustrated by Deka Sepdian, the illustration feels like a very confident and bold statement, creating an expectation for the music within. The color theory itself encourages an excitable and energizing reaction with all of its warm and vibrant hues.

One Fire opens with a minute long introductory track that is evocative of the opening of an undefined indie film, where you aren’t yet certain what you’ve gotten yourself into, but the opening scene has enough intrigue for you to commit to finding out. The “Intro” starts with dialogue from a male figure, police sirens, and a melody building up and up until it blends perfectly into the first official song. The borderline between the introduction and the official start of “Hate Like Me” is only denoted by the addition of heavy percussion—that’s how smooth the transition is. Once the vocals begin, they hit you right in the face—in the best kind of way. “Hate Like Me” certainly feels like one of the more nostalgic melodies on the record, being very reminiscent of some of the band’s earlier works. The acutely catchy beats and rhythmic arrangements create a fantastic landscape for the progressively changing vocals. Throughout the piece, the vocals evolve from traditional harsh vocals all the way to more rigid beat-driven pseudo chanting, with a drop of softer clean vocals in the last quarter. One could even argue this song to be a near-perfect vocal portfolio for singer Andy LaPlegua, as there is certainly no hesitation in expressing the broad range of his voice. Audibility aside, the lyricism itself is right on par with Andy’s description of this track, stating, “We all used to be so full of passion. For music, for love, for…hate. What happened to you? You used to hate like me.”

The journey progresses through the third track, “Broken United,” which adds a more noticeable electronic element to it. Much of the aggression in the tracks is a very cathartic and therapeutic release, likely as much for the listener as it is for the performer. This track is a great embodiment of this sentiment, especially within the chorus. The swift melancholic symphonic transition nearly three minutes into the track is a good softening for what is otherwise pure combative energy.

“Guns at Last Down” is quick to follow, with an even punchier sound than the previous tracks. Featuring Burton C. Bell of Fear Factory on guest vocals, “Guns at Last Dawn” simply rips into exceedingly fast paced musicianship and takes you on a whirlwind ride. It’s not without its slow pauses, albeit in some unexpected moments in the song. “Lobotomy” sounds like something that would do well in a goth or electronic nightclub. A bit more monotonous in comparison to the tracks that surround it, it’s easy to drift through this song in a very pleasant way. The album title track follows suit and has some of the most compelling lyrics of all the songs. A perfect median connector between the first half of the album and the last, this song feels less structured and raw. There is a battle between the clean sound and the thrashy one, and is comparable to how the wave of powerful emotions such as anger and frustration flow through the human mind.

“Bottle of Pain” is a full genre shift diving directly into a folk metal-esque expression—the ballad of the album (come on, all albums need a good ballad), a great song to throw in to diversify the sound. To ensure these is no confusion as to what Combichrist is, however, “2045” takes you right back to the band’s core sound before pausing at the minute long “Interlude.” Andy’s sentiment rings loud in his vocals during the interlude, a perfect delivery of the album’s message. “Understand” is much like “Hate Like Me,” pulling you back into the record’s tight grip. The Dead Kennedys “California Über Alles” cover is wedged right after, a fantastic homage to the original. This representation is much harsher and darker than the original, in true Combichrist style, but still pays a good reverence to the source material. Considering the current tumultuous climate in society, this song is more than fitting. The album concludes with “Last Days Under the Sun” and “The Other,” both of which fill in the musical gaps the record may have had, concluding as a full rounded ending to the story.

Combichrist has as much a presence on stage as they do from home speakers, and the sound of One Fire can be immediately envisioned as a live performance. This especially rings true for those that have experienced Combichrist’s showmanship, specifically on the more aggressive songs on the album (“Hate Like Me,” “Guns at Last Night,” “Understand,” to name a few). Live reference aside, One Fire is the ultimate encompassment of the band’s discography, with influences from all of Combichrist’s prior releases easy to spot within each song. It wouldn’t be surprising if a decade from now, this record is referenced as a good introduction to the band for virgin ears. ~ Anabel DFlux

METAL CHURCH: From the Vault