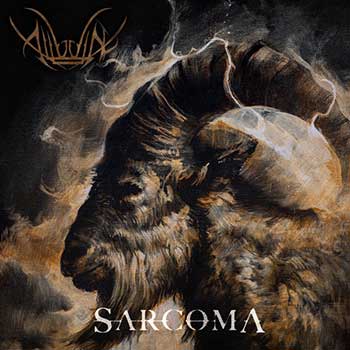 TECHNICAL DEATH METAL: On their second full-length album and Nuclear Blast debut, Sarcoma, supergroup Alluvial crafts a virtuosic masterpiece of technical death metal. The group, which features ex-The Faceless guitarist Wes Hauch alongside newly added vocalist Kevin Muller (ex-Suffocation), and current members of Entheos and Aegaeon actually utilizes some of the same elements that saw The Faceless soar to great acclaim during Hauch’s time in the band, but in a way that sounds distinctly less avant-garde and more accessible to the average metal listener, while still advancing the genre and taking the music in less explored directions for the genre.

The new record is Alluvial’s first featuring vocals—their 2017 release The Deep Longing for Annihilation was only instrumentals. Much like that album, Sarcoma features dynamic, complex, tightly syncopated riffage, and drumming that takes the listener on a journey through a hellish soundscape. Muller’s range as a vocalist is crucial to this effort, his vocals at times hauntingly melodic, at other times brutally deep and guttural.

The album opens with neck breaker “Ulysses,” chock-full of time signature changes, guitar chugs, and even an incredible guitar solo. The record doesn’t slow down as the next track “Thy Underling,” begins with a bouncy riff and fast double bass, leading into a chorus with melodic vocal elements overlain by Muller’s guttural vocals. Alongside these two stand-out songs is the fourth track and early single, “40 Stories,” which begins in 6/8 with soft melodic vocals that builds to a chorus with the most memorable and cool guitar riff on this record as Muller scream-sings the refrain, “And it’s gone, thrown below / Repurpose the dawn, and bow in its glow.”

There are a few songs on the album that while good, really just feel like filler tracks—chiefly, “Exponent,” “Sleepers Become Giants,” and to a lesser extent, “The Putrid Sunrise.” One of the most surprising songs is the instrumental number, “Sugar Paper,” which sees Hauch and his cohorts putting on the best display of musicianship on the album. The record closes on a strong note with “Anodyne,” in which the entire band shines, with the coolest guitar work on the album, alongside the more versatile guttural vocals from Muller. With Sarcoma, Alluvial unveils an updated sound that is uniquely their own and one that is sure to see them playing bigger tours. ~ Nathan Katsiaficas

CONVERGE: The Dusk in Us