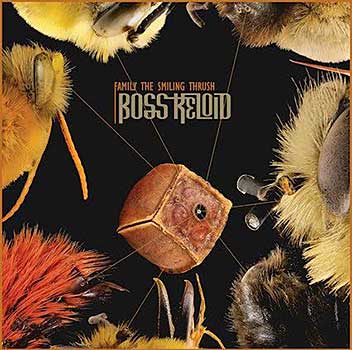 PROG DOOM SLUDGE: Boss Keloid’s name has been kicking around for years—and by default, their name has generated some particularly gnarly mental imagery—but it hasn’t been until now that any depth has been afforded their material. That they’re a British act that has their fellow countrypersons loudly singing their praises is an encouraging sign. Historically, the Brits are known for cutting down a band/performer as quickly as they’ll build them up, which works in complete opposition to how things work in the US where unerring patriotism is put on display and loads are blown over anything waving Old Glory.

Cultural politics aside, the fifth album by these Wigan natives barrels along like Mastodon, Netherlands, and Soundgarden banding together to convince the rest of the world of an unspoken truth: that Tool is boring as fuck. Powered by vocalist/guitarist Alex Hurst’s towering, gravelly croon and what appears to be a combination of baritone guitar and a collection of pedals designed to ape a synth-axe, Family the Smiling Thrush employs an undercooked steak thickness while weaving in a prog rock sensibility without falling into the trap of “musicians only” impenetrability and “where did the song go?” braggadocio.

The whirring guitar wheeze may take some getting used to, but once the confounding tone gets embraced, Boss Keloid’s skittish skill quickly creates a novel experience. Admittedly, the album starts off on a less than inspiring note with “Orang of Noyn,” which obliterates a neat little East Asian melody with a rubbery, but generic, plod akin to something Maynard Keenan and his gang of ennui peddlers might do. But as the song advances, guitar and vocals layers emerge, space duels with massive stacked chords, and the melody creeps along to make this song akin to the proverbial slow start sprinter.

The next two tracks, “Gentle Clovis” and “Hats the Mandrill,” ride a mélange of guitar tones, peaks and valleys, and Hurst’s soaring vocals to an exceptional Badmotorfinger meets King Crimson effect. The title track is as massively melodic as it is massively heavy with 7/8 quarter note riff resolutions destined to have bangers banging their fists while indie rock dudes don their ironic wool sweaters to the clean breaks after the choruses. “Cecil Succulent” is where Mastodon and Netherlands comparisons expressly come to light with a little Torche and some Robert Fripp/Reeves Gabrels six string wandering working to smarten up the rough edges. A similar tack is taken on album closer “Flatt Controller,” which finds body lurching sludge tempered and caressed by some early Yes acoustics, the track’s perfect storm of intellectualism and rage being the thematic denouement to an album that punches heads as potently as it fills them. ~ Kevin Stewart-Panko

BEASTO BLANCO: We Are

ALESTORM: Curse of the Crystal Coconut