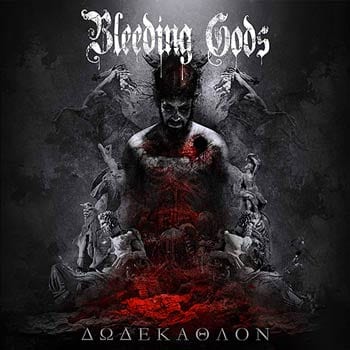 METAL MEETS MYTH: Never has a crash course in Greek mythology been so punishingly brutal. Yet that is the formula for Dutch epic death/black metal outfit Bleeding Gods and the band’s sophomore album, Dodekathlon. The 12 track epic chronicles the 12 labors of Hercules, from his battle with the Nemean Lion, wrestling of the Cretan Bull, and making shish kebab out of the Lernaean Hydra. For comparison, the brutality laid down by the formidable five piece likens itself to Septic Flesh and the recent melodic meets death stylings of Fleshgod Apocalypse. There is true grandiose qualities to early cuts “Bloodguilt” and “Multiple Decapitation,” the latter of which sees guitarists Ramon Ploeg and Rutger Van Noordenburg in rare form. There’s an ominous foreboding that sweeps across the record like a grim plague, reflecting the regret and misery of our atypical hero as he seeks to repent for the death of his wife and child by his own hand. “Inhuman Humiliation” and “Saviour of Crete” ramp up the intensity, which near climaxes with the frenzied “Tripled Anger,” juxtaposed by the delicate fingerpicking and subdued softness of “Tyrannical Blood.” Dodekathlon is part history lesson, part coordinated display of metal mastery at its finest. It is not only one of the finest concept albums in years, but perhaps one of the crucial epic death metal releases of the decade. ~ Dillon Collins